View source
If you were looking for the article about the season, then see season 5.

July 3, 2014
The Complete Fifth Season is a SpongeBob SquarePants DVD box set that was released on November 13, 2012 and contains all 41 episodes from season 5.

Money talks and donuts walk in this rip-roaring collection of SpongeBob episodes! See chewed gum take over the pineapple, tag along with SpongeBob and Patrick on an undercover spying mission, help rid the treedome - and Sandy! - of fleas, and see Squidward act... nice? It's underwater hijinks at their best! 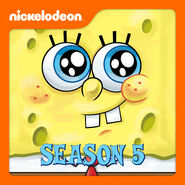