Encyclopedia SpongeBobia
Register
Don't have an account?
Sign In
Advertisement
in: Episodes, Season 6 episodes, Specials, The Clash of Triton
English

The Clash of Triton

View source
This is the page about the episode. For other uses, see The Clash of Triton (disambiguation).

"Tentacle-Vision"
"The Clash of Triton" is a SpongeBob SquarePants episode from season 6. In this episode, King Neptune will not celebrate his birthday until SpongeBob and Patrick find his son, Triton.

The episode begins on King Neptune's 5,000th birthday, his wife, Queen Amphitrite calls the Krusty Krab and sets reservations to celebrate King Neptune's birthday there. Mr. Krabs sets up a crowd of watchers for some extra money after Shubie wanted to watch the royal family eat through the window, and SpongeBob cooks 5,000 Krabby Patties for King Neptune just as he arrives.

However, King Neptune is overly depressed about his son, Triton, when SpongeBob mentions him. Neptune shows everyone a movie that he made about his sad separation with Triton, locking him in a cage in the Island in the Sky until he learns to become a proper god like his father. To ease King Neptune's pain, SpongeBob plans to go to the Island in the Sky and release Triton from his shrunken cage. Unfortunately, the lock on the cage was impossible for SpongeBob to undo. So, he then asks Patrick to unlock it and succeeds.

Triton comes out and offers the two a "ride" after turning the cage into a car, which SpongeBob and Patrick accept. But Triton pulls over when they were halfway there and tells SpongeBob and Patrick he does not need them anymore, knocking them out of the car with one whip of his tail. He immediately goes to Bikini Bottom and destroys it to have revenge on his father for locking him up. Then SpongeBob and Patrick return to Bikini Bottom and see the destruction. They both realize this was the reason Triton was locked up. They sneak into the Krusty Krab using the secret entrance, which led to inside the grill. SpongeBob tells Patrick to be very quiet.

Patrick agrees, but unfortunately throws the top of the grill backward, making a loud clashing noise. The two peek from behind the cashier window and see that Triton has locked up Neptune and all the party goers in a cage. King Neptune apologizes to Triton and begs him to release everybody else and take him instead, but he ignores him. Then SpongeBob and Patrick unlock the cage staying hidden in the grill. Triton, in great dismay, says to his father that he was only kidding and tries to swim away. But an angry Neptune catches him by appearing in front of him. Triton tries to tell him that he did not mean to lock him in a cage, but his father thinks he has gone too far and is about to punish Triton for his actions.

Neptune then sees what Triton did to Bikini Bottom and angrily asks him if he was responsible for it. Triton begs Neptune not to send him back to the cage. But Neptune, instead of punishing him, says that he just gave him the best birthday present he has ever received. Triton learned to use his powers at long last, and that was what Neptune wanted all along. Neptune finally accepts Triton for who he is and the two hug with everyone cheering for them. Then, with Amphitrite, they return home. As they leave, Neptune says this was the best birthday he ever had, and it was all because of SpongeBob. SpongeBob was very happy with himself, but everybody hears what he said and begin to form an angry mob. The episode ends with SpongeBob and Patrick running as the angry mob of citizens of Bikini Bottom chase them. 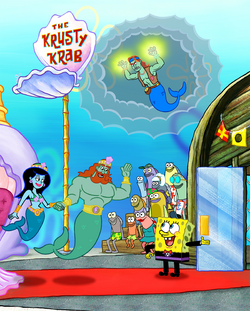 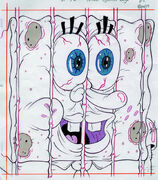 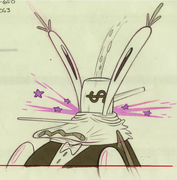 "The Clash of Triton" received mixed to positive reviews from critics. Steve Earhart called the episode "a hilarious special that runs perfectly with the six other quirky and crazy-funny episodes" during his review of the Triton's Revenge DVD.[8] Shannon Gosney of The Mommy-Files said that "you'll love this special[...]"[9] Nancy Basile of the About.com said, "it was funny enough and endearing enough to make it well worth watching."[10] Ken Tucker of the Entertainment Weekly said "The values of SpongeBob remain intact. The script's rapid-fire gags, the show's wildly bright color palette, and the series' resolute avoidance of heavy-handed messages combine to give Stephen Hillenburg's SpongeBob its adventurous energy." He added, "[SpongeBob] SquarePants just doesn't seem to get old, does it?"[11]

Maxie Zeus of Toonzone was more critical on the special, saying "the plot isn't even well structured, being slack and inefficient about getting from one situation to the next." He added "the whole special is like this: plot points clumsily rolled out to 'motivate' other plot points, which are themselves there only to motivate yet more plot points. But somehow, while they were distracted by all this wheezing machinery, they forgot to put any actual humor in."[12] Paul Mavis of DVD Talk, in a review of Triton's Revenge said: "'The Clash of Triton' spends way too much time on exposition, setting up the short's premise while skimping on what should have been a priority: the jokes."[13]