"Employee of the Month"
"The Chaperone" is a SpongeBob SquarePants episode from season 1. In this episode, SpongeBob takes Pearl to her prom.

The episode begins at the Krusty Krab, with SpongeBob making a Krabby Patty in the kitchen. Just then, Pearl runs in crying so profusely that her tears begin to literally flood the restaurant. Mr. Krabs asks her what is wrong, and she explains that her apparently "long, tan, and handsome" prom date has just dumped her the day before prom. Mr. Krabs offers to take her instead, but she starts crying, causing an earthquake. He then suggests she take Squidward or one of the restaurant's customers to the prom, but she continues crying, which causes the earthquake to become worse. Ultimately, he offers to have SpongeBob accompany her. Pearl does not want to be embarrassed by SpongeBob, and begs him to try his best to not do anything embarrassing.

At home, using a magazine Gary provides as a guide, SpongeBob dresses up and uses extremely long and unstable artificial legs to make himself look "long, tan, and handsome" for Pearl. On the night of the prom, things initially work well for SpongeBob and Pearl. However, SpongeBob's costume soon begins malfunctioning, resulting in disaster and severely embarrassing Pearl. SpongeBob, after having broken everything at the prom, runs into the ladies' restroom crying.

Pearl, feeling sorry for him, attempts to console him and restore his confidence. This ultimately succeeds, and Pearl and SpongeBob join the prom dance. They begin doing a dance called "Doing the Sponge," which everyone else soon begins doing. However, this results in many injuries and mass destruction. An angry mob forms and lifts up Pearl and SpongeBob, who think they are popular enough to be lifted as until the mob throws them out of the building.

SpongeBob apologizes, but Pearl tells him not to worry as she knew it was going to be a total disaster the whole time and even though it was a disaster, it was really fun. Mr. Krabs opens the door with a rake saying "Keep away from me flower!" Pearl thinks he is talking about her, but Mr. Krabs really meant a literal flower on the walkway. Pearl says goodnight to SpongeBob as she returns home, and tries to get SpongeBob's attention, but as she does so, SpongeBob appears to be frozen.

Mr. Krabs congratulates SpongeBob on his success at the prom, then goes in his house and closes the door, then the real SpongeBob appears to retrieve his wax dummy of himself, and carries it off, laughing as the episode ends. 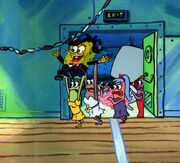