In the beginning of the episode, SpongeBob is at boating school, and Mrs. Puff announces a new student will be joining the class. His name is Flats the Flounder, and he tells SpongeBob that he is going to "kick his butt." SpongeBob at first assumes him to be joking, but Flats soon makes it clear that he really means to beat up SpongeBob. An extremely paranoid SpongeBob tries to seek help and to reason with Flats, but to no avail.

He eventually runs away into town, where Flats attempts to run him over with a garbage truck, but he eventually drives over a banana peel SpongeBob drops, causing it to flip over. Flats awakens in the hospital, where he learns that SpongeBob saved his life by performing CPR on him for five hours straight.

However, due to SpongeBob's spongy body, he absorbs the blows without harm. Flats continues to hit SpongeBob nonstop throughout all of next week, until he finally faints from exhaustion; his classmates cheer for SpongeBob. However, pitying Flats, SpongeBob starts a speech about how violence leads to nowhere, which ends with him making a fist. Mrs. Puff enters and sees Flats unconscious and SpongeBob making a fist, and believes SpongeBob beat up Flats. Mrs. Puff ends the episode by shouting to SpongeBob that she's going to kick his butt. 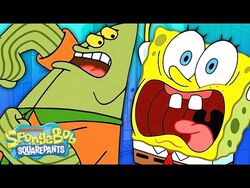