"There Will Be Grease"

"Sea-Man Sponge Haters Club"
"The Big Bad Bubble Bass" is a SpongeBob SquarePants episode from season 13. In this episode, Karen tells the fairytale of a nerd trying to steal an action figure from his three little neighbors.

The episode begins with Karen the Computer Fairy introducing the episode about Bubble Bass. Bubble Bass wakes up and declares his intent to get the Pigulon action figure to complete his collection. He dresses up in a Wolfman costume and goes to the Toy Barrel to try to obtain it, but the store is sold out of Pigulon figures. Bubble Bass notices that SpongeBob and Patrick bought the last Pigulon figure. Patrick rips open the package and uses the figure as a scratcher. Bubble Bass tries to obtain the figure from them, and SpongeBob agrees to give it to him at first, but soon rejects his offer after mentioning that he and Patrick bought it together.

While Karen continues narrating, Bubble Bass pushes her out of the scene. He later shows up at SpongeBob's house disguised as a toy inspector in an attempt to take back the Pigulon figure. SpongeBob lets Bubble Bass into his house and opens his hidden vault where he keeps his toys. SpongeBob and Patrick show the toys to Bubble Bass, continually asking him if any of their toys seem dangerous to him. Although several toys harm Bubble Bass, he throws them away, declaring them not to be dangerous. SpongeBob finally shows him the Pigulon figure, but instead gives him the Perilous Percival figure as he went out of order. The fuses on the toy result in Bubble Bass flying out of the house.

Bubble Bass goes back to SpongeBob's house, now portraying as a ghost hunter in an attempt to scan the house. He comes across the Pigulon figure, saying it contains spirits inside. He attempts to take the figure, but SpongeBob and Patrick say that they will make the figure vanish in their home. They call out a spell that results in a ghost appearing, and Bubble Bass is taken in with him, as the Pigulon figure remains in SpongeBob's home.

Karen continues to narrate the story, in which Bubble Bass gets the help of his mother. They show up at Squidward's house, to which Bubble Bass gives the Fizz Bomb fuel to his mother, but she says that she does not need it. She inhales a belch which destroys Squidward's house, as well as the water on the surface. Mama Bass tells SpongeBob and Patrick to hand over the figure. SpongeBob gives her the receipt, which makes Mama Bass mad. She inhales another belch which burps away Bubble Bass's clothes, leaving him in his underwear. Bubble Bass cries, but SpongeBob and Patrick give him the Pigulon figure, which is now broken. Karen concludes the narration with Bubble Bass having put the figure on his shelf and Squidward having to rebuild his house. Squidward chases after Karen after she mentions his insurance, although she disappears inside the storybook, as the episode ends.

This episode was confirmed by Cartoonlounge.de on April 8, 2022.[1] 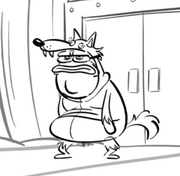