The Best of Nickelodeon: Summer Adventures

June 5, 2006
The Best of Nickelodeon: Summer Adventures is a Nicktoon crossover DVD release that was released in the United Kingdom on June 5, 2006 and features one episode each from seasons 1 and 2 of SpongeBob SquarePants, along with select episodes of All Grown Up and Rocket Power. 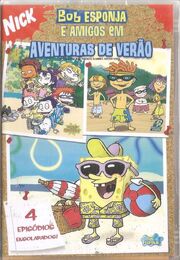 2011 back re-release cover
Add a photo to this gallery
Retrieved from "https://spongebob.fandom.com/wiki/The_Best_of_Nickelodeon:_Summer_Adventures?oldid=3318689"
Community content is available under CC-BY-SA unless otherwise noted.