"The Krusty Slammer"
"The Ballad of Filthy Muck" is a SpongeBob SquarePants episode from Season 12. In this episode, Patrick takes his grime to a new extreme, playing around in so much trash that he becomes unrecognizable.

The episode starts with Patrick opening his rock, which has an awful stench, and waking up. He puts his body on the floor, and a lady with two worms walks by his house. The lady smells the stench and uses her worms to block the stench from her nose, and then she goes on with her day. Patrick starts to walk to the Krusty Krab, while making his house evaporate at the same time.

When Patrick reaches the Krusty Krab, everyone runs out because of the awful smell Patrick has. SpongeBob is then seen cooking, and smells the awful stench of Patrick. SpongeBob asks Patrick when was the last time he took a bath, but then he said that his mind couldn't go back far. SpongeBob afterwards compliments Patrick's smell, since it is so bad. He then decides to smell it again.

Mr. Krabs is then seen playing with his fake bank, until he smells Patrick's stench. He tries to find out where the smell is coming from, until eventually he finds out it's coming from the kitchen. After learning its Patrick, he promptly kicks out Patrick and tells him to not come back until he gets rid of his smell. Patrick refuses and decides to play in the trash, so Patrick goes to many filthy areas in Bikini Bottom and becomes more and more filthy. He ends up at The Dump and is astonished by the filthiness of it, and goes in.

The next morning, Patrick (now known as Filthy Muck) is seen entirely covered in garbage, going down from the Dump into a lane. Rube takes a picture of Patrick and the scene changes to a kid holding a newspaper telling everyone that a Filthy Muck has been spotted around town. A guy with a big nose sees this and puts a humongous clip on his nose. Filthy Muck is then seen at a café, making everyone run away. However, Old Man Jenkins does not, since he cannot smell Patrick's stench.

Back at the Krusty Krab, SpongeBob sees Filthy Muck on the newspaper and gives a speech about him. The fish at the restaurant give plaudits to it, and SpongeBob goes looking for Patrick. He ends up at the dump, where he sees Filthy Muck, but he can't get close to him since he smells so bad, so SpongeBob puts some slime under his nose to do the trick. Filthy Muck then holds SpongeBob and puts slime all over him, and SpongeBob calls himself Little Yuck. The two then start playing around in the mud and slime in the same places Patrick played in the mud and slime before.

While Little Yuck and Filthy Muck are at the dump, a crowd of angry fish surround them. The crowd tells them that they are gonna make them flee, but then Little Yuck reveals himself to be SpongeBob, Bikini Bottom's favorite fry cook at the Krusty Krab. After recalling this, they let SpongeBob go on the condition that he clean up but they still want to get Filthy Muck out of town. SpongeBob doesn't want them to make Filthy Muck flee though, since he's Patrick and Patrick is SpongeBob's best friend. So SpongeBob and Filthy Muck run away and get chased by the crowd.

However, when they clean Filthy Muck, Patrick doesn't appear in the inside. SpongeBob becomes sad, but the real Patrick appears, in his shower clothing. Patrick says that when he got kicked out of the Krusty Krab, he decided to take a bath so he could enter to get food. SpongeBob is glad, but realizes that Filthy Muck was real. Old Man Jenkins is then seen freaking out, as SpongeBob questions this sudden change in behavior and the old man reveals since Patrick's shower clothes fell off of Patrick and he was showing his butt. Everyone laughs, and then Filthy Muck is seen on a hill, with Rube taking a picture to end off the episode. 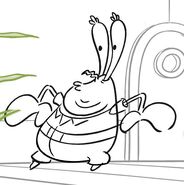 Retrieved from "https://spongebob.fandom.com/wiki/The_Ballad_of_Filthy_Muck?oldid=2592056"
Community content is available under CC-BY-SA unless otherwise noted.