The Ballad of Filthy Muck

"The Krusty Slammer"
"The Ballad of Filthy Muck" is a SpongeBob SquarePants episode from season 12. In this episode, Patrick takes his grime to a new extreme, playing around in so much trash that he becomes unrecognizable.

In the beginning of the episode, Patrick wakes up and gets out of his rock so he can walk to the Krusty Krab. Everyone in the restaurant then runs out due to Patrick's hideous smells, but when SpongeBob smells his stench, he is amazed at just how smelly he is. After SpongeBob decides to smell Patrick again, Mr. Krabs smells an awful stench and investigates what it is. He finds out that the stench is coming from Patrick, so he kicks him out of the restaurant. This makes Patrick angry and wants to revolt for his stink-dependence.

Patrick starts messing around in grimy places of the city, but when he starts messing around in the Dump, he eventually becomes so filthy he is unrecognizable. Patrick starts going around town in this filthy form, causing him to get listed in the newspaper as Filthy Muck. SpongeBob finds out about this news and tries to look for him, eventually finding him at the Dump. Since Filthy Muck has a force-field of stink, SpongeBob puts on a filthy mustache on himself to prevent the smell, but this leads to him getting into Filthy Muck's game and starts to go around in the grime as well.

Another news article comes out about how Filthy Muck now has a partner. SpongeBob and Filthy Muck start going all over town, causing people to run away due to their smells, except for Old Man Jenkins, as he cannot smell. Eventually, the citizens have had enough of this, so they confront the two gross creatures and riot against them. SpongeBob cleans himself so they do not riot against him, but he tries to tell the citizens that Filthy Muck is his friend and he does not want him to get hurt. However, the citizens still try to run them out of town.

Eventually, SpongeBob tries to clean Filthy Muck, and tells everyone if they work to clean him, he will turn normal again. Everyone does so, but Filthy Muck completely disappears after getting cleaned. It turns out Patrick had gone to take a bath, after he realized he would be forbidden from the Krusty Krab. SpongeBob realizes it was just muck the mob cleaned up. Old Man Jenkins then freaks out after seeing Patrick letting go of his towel, exposing his posterior to everyone. The crowd laughs while on a hill, the Filthy Muck reforms and Rube takes a picture as the episode ends. 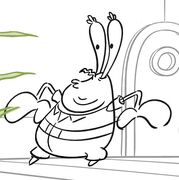