The Art Contest: No Cheating Allowed!

In the beginning of the book, Squidward finds out that the Bikini Bottom Art Society is having an art contest and offering the winner a membership in the fancy club. However, when he discovers that his archenemy, Squilliam Fancyson, is not only a member of the club, but a judge at the contest, Squidward vows to win no matter what it takes, so he decides to trick SpongeBob into painting pictures for him to use at the contest.

He spends all night painting, and is exhausted the following morning. Squidward goes to SpongeBob's house and takes a collection of SpongeBob's best paintings to show off. Before he brings them to the contest, however, he replaces SpongeBob's signature with his own.

Later, while the contest is happening, Squilliam is astounded by the fact that Squidward created such works of art. Squidward is about to win when SpongeBob enters the building where the contest is being held, and instantly recognizes that the painting is his. Squidward is disqualified, but the judges, one by one, reveal that the paintings they used to get into the Art Society also were not theirs, including Squilliam. They all realize that since SpongeBob is the only one who didn't cheat, he is the only person that belongs in the Art Society. Not wanting to be in a club with no one else in it, SpongeBob redesigns the club into a Bubble Blowing Society, so that everyone can be in it, as the book ends. 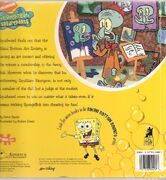 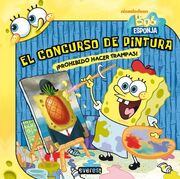 Spanish Cover
Add a photo to this gallery

Retrieved from "https://spongebob.fandom.com/wiki/The_Art_Contest:_No_Cheating_Allowed!?oldid=3535270"
Community content is available under CC-BY-SA unless otherwise noted.