The Stingray Brothers and Barnacle Bay Shrimp's Circus are coming to Bikini Bottom, but on the day of the circus, Patrick comes down with a cold and has to stay home. If Patrick can't go to the circus, can SpongeBob find a way to bring the circus to him? Join SpongeBob under the big top hat and find out!

The book starts off with SpongeBob pointing out a poster for a circus that reads "The Stingray Brothers & Barnacle Bay Shrimp's Circus: Greatest Show Under the Sea!" Patrick then says he wishes the circus would come to the sea, and SpongeBob says Bikini Bottom is under the sea, and Patrick says, "I always wondered why there were so many fish around here."

The next day, SpongeBob runs up to Patrick's rock and knocks on it, but does not get an answer. SpongeBob knocks again, and once again, no answer. SpongeBob lifts up the rock to find Patrick lying sick in bed. SpongeBob wants to help his friend and does what his grandmother would do in this situation. He sings a song that goes: "Get well Patrick, don't be sick! This little song will do the trick! La-la-la you'll feel better! By the time I knit this sweater!" The song doesn't work.

SpongeBob tries to do a get-well dance and jumps around Patrick's bed. But that didn't work either! Next, SpongeBob tries hypnotizing Patrick. "You are not sick," Patrick sneezes in SpongeBob's face with a loud "ACHOO!" SpongeBob announces that he's now leaving for the circus. Patrick clutches SpongeBob's leg and begs SpongeBob to stay with him, but SpongeBob runs off, promising to bring him some circus peanuts.

SpongeBob arrives at the circus and takes his seat. SpongeBob loves it and begins talking to Patrick, but realizes he isn't there. SpongeBob is saddened and begins to cry. He decides to head home to do what any "self-respecting sponge would do."

Patrick is at home when he is awakened by a loud voice. "LADIES AND GENTLEMEN AND ALL STARFISH NAMED PATRICK!" Patrick leaps out of bed and stares in awe at the source of the sound. SpongeBob is wearing a top hat and a fake mustache. "WELCOME TO THE SECOND GREATEST CIRCUS UNDER THE SEA!" SpongeBob begins the show with a juggling act. he tosses five spatulas up while balancing ten Krabby Patties on his head. SpongeBob then runs over to a very tiny tightrope. Patrick hides under his pillow and refuses to look. Next, SpongeBob swallows one of Squidward's clarinets before saying, "Don't try this at home!" "Too late," says Patrick with his mouth full of the instrument. For his final act, SpongeBob shoots himself out of a cannon. SpongeBob took a final bow. Patrick cheers as he runs out, to show SpongeBob what he missed. SpongeBob asks: "Wait, aren't you sick?" "Not anymore! The circus cured me!" Yells a happy Patrick!, as the book ends. 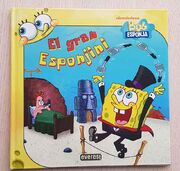