"SpongeGuard on Duty"
"The Algae's Always Greener" is a SpongeBob SquarePants episode from Season 3. In this episode, Plankton travels to an alternate universe where he and Mr. Krabs have each other's lives.

After failing to steal the Krabby Patty secret formula once again, Plankton decides that he is tired of eating holographic meatloaf. Believing Mr. Krabs to be much better off, he longs to switch lives with him. Karen points out the transmogrifier he conveniently has to do just that and suggests he use it. Plankton takes her advice and later finds himself waking up in Mr. Krabs' office. Now wearing Mr. Krabs' outfit, Plankton looks at a nameplate reading "Mr. Plankton" and realizes that he has successfully entered a universe where he is, in fact, successful. His first act is to have Alternate-Universe SpongeBob SquarePants, now his employee, present him with two Krabby Patties for "bun inspection."

Before Mr. Plankton can get back to his Krabby Patties, his new daughter, Pearl Plankton, arrives, asking for an advance on her allowance. He gives her a dollar, which she finds unacceptably paltry. As she sobs, a customer comes to complain about Alternate-Universe Squidward's horrific attempt at cooking while Alternate-Universe SpongeBob dissolves over a slightly mistaken order. Mr. Plankton begs for all the complaining to stop, which does in the face of a siren going off.

Krabs vows to Mr. Plankton that one day he will manage to steal a Krabby Patty, even if he has to return day after day after day to do it, a persistence that makes Mr. Plankton realize how intolerable living Krabs' life is for him. Plankton then screams, unable to stand this new life and its problems any longer, and presses a button to send himself home.

Plankton is transported directly in front of his holographic meatloaf back at the Chum Bucket, which he has a newfound appetite for and scoops up eating eagerly, as the episode ends. 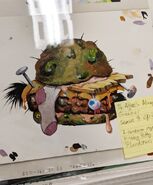 According to the painting, the production code is 5571-161 and has the quote on quote "Gary," meaning this was meant to be in the season 2 episode "Dumped."