"Sanitation Insanity"
"Teacher's Pests" is a SpongeBob SquarePants episode from season 11. In this episode, Mr. Krabs and Plankton have to take boating school classes. Thankfully, SpongeBob's there to show them the ropes.

After Mr. Krabs and Plankton get involved in a chaotic car accident, a furious police officer tells them that they have to attend traffic school to start the episode.

Mr. Krabs angrily walks into Mrs. Puff's Boating School, where he intends to find the best seat. He then gets into a fight with Plankton over where to sit, which is then settled by Mrs. Puff, who then shows them a video on driving safety using a projector. The video portrays SpongeBob as the careless driver who should not be emulated. At the end of the video, SpongeBob crashes into the camera, which causes him to fly through the projector screen into Mrs. Puff, late for boating school.

SpongeBob then shows Mr. Krabs and Plankton the Good Noodle Board. Plankton claims he does not care, but he quickly changes his mind when Mr. Krabs makes a contest out of who can get more stickers.

After Plankton puts an apple on Mrs. Puff's seat, he and Mr. Krabs force-feed various fruits to Mrs. Puff in an attempt to please her. It is at this point when she realizes that they just want stars on the Good Noodle Board.

Then, they go to the testing track, where Mrs. Puff informs them they must pull forward slowly and carefully. In an effort to show off, Mr. Krabs proceeds to drive up the side of the lighthouse, and Plankton follows behind.

The two end up crashing towards the top and fall to the ground, resulting in their test failing. SpongeBob's boat then lightly taps into the others, which causes a massive explosion.

At the Bikini Bottom Hospital, Dr. Actor informs Plankton where he is. He then tells him there were complications when putting the body parts together. It is revealed that Mr. Krabs, Plankton, and SpongeBob have all been sewn together. By the end of the episode, Mr. Krabs and Plankton scream while SpongeBob laughs. 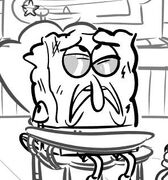 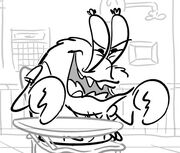 There's a scene where SpongeBob runs over fake pedestrians during the last driving session.[2]