Encyclopedia SpongeBobia
Register
Don't have an account?
Sign In
Advertisement
in: DVDs, Home video, SpongeBob SquarePants in the United Kingdom,
and 4 more

View source
If you were looking for the article about the episode, then see "Sweet and Sour Squid."

Wrap your tentacles around these episodes featuring that sour cephalopod, Squidward Tentacles! Relive his happiest memory, see the extremes he goes to to avoid his coworker, get lost in a dream world, find out if Squiddy knows how to share, and more!

Who's the most miserable person under the sea? Squidward Tentacles! And he's determined to stay that way, even when Plankton tries to be his friend (in another desperate attempt to get hold of the secret Krabby Patty formula, of course!). There's misery to go around in this Squidward-centric collection that has our most sour cephalapod taking out a restraining order against SpongeBob (making it REALLY tough to work together), trying to find a happy memory that doesn't resemble a blank television screen, seething with jealousy at Patrick's new – and profitable – career putting googly eyes on rocks and calling it art, getting locked inside a time capsule with SpongeBob and Patrick, experiencing the ultimate dream world, forced to share a locker with SpongeBob, and checking out SpongeBob's glimmering solution for a barnacle-faced Pearl. Let the moaning and groaning (and laughing) begin! 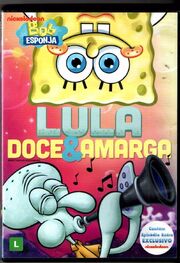