"Goons on the Moon"
"Surf N' Turf" is a SpongeBob SquarePants episode from season 11. In this episode, Sandy struggles to build a ship-in-a-bottle before a big contest, so SpongeBob calls in a little extra help.

Sandy then says that she is all out of fresh bottles, with SpongeBob taking out the secret formula, and taking out the formula to give the bottle to Sandy. However, SpongeBob realizes his mistake, goes to an airport nearby, gets on the plane, onto a cable car into a devilish mountain. Inside is Plankton, with the formula. SpongeBob takes back the formula and goes back to the treedome. Meanwhile, Sandy has finished her new ship. SpongeBob pushes the ship into the bottle, only for it to sink in it and have Sandy start chewing her furniture again. SpongeBob suggests to Sandy that she should talk to Mr. Krabs, as he thinks that Mr. Krabs knows a lot about ships and bottles.

When Mr. Krabs arrives, Mr. Krabs says that the money from the contest will be fifty fifty. SpongeBob likes that they are working together, so he gets a picture Fiasco was working on in the background. Sandy starts to make ship-in-a-bottles with a furnace. But when she shows it to Mr. Krabs, Mr. Krabs smashes it. When Sandy makes more, Mr. Krabs keeps smashing them. Eventually, Mr. Krabs accepts one, although he accidentally smashes that one, too. Sandy feels like a chewed-up twine after that, so she goes back to her treedome and gives up, telling Mr. Krabs that he could try to do the challenge himself. Mr. Krabs tries to find things to work with until he eventually sees Sandy's tree.

The next day, when Sandy wakes, she realizes that a big ship was built in her dome made by Mr. Krabs. When Sandy asks what this is, Mr. Krabs takes her outside to show her the big ship. Sandy is astonished, but when she asks where Mr. Krabs got the wood, he said that he chopped down her tree, which makes Sandy mad. Sandy tries to give Mr. Krabs his comeuppance, but Mr. Krabs had already gotten on his boat and is driving the whole treedome with the ship in it to the contest. Sandy, however, is not finished, as she gets her submarine from the ground and heads to Mr. Krabs.

Meanwhile, Mr. Krabs is in the city, damaging property because of how big his ship-in-a-bottle is. However, he sees Sandy's submarine from the boat window of his boat, so he swerves to get Sandy off her tail. Sandy ends up destroying the front of the Krusty Krab, and SpongeBob notices this when he gets out of the kitchen. Sandy gets her submarine back on Mr. Krabs' tail, where she starts firing a ton of acorns at Mr. Krabs. Mr. Krabs thinks it is not enough, although he gets smashed by Sandy's submarine. Sandy then says that this is her 500th rodeo, trying to break the chain connecting Mr. Krabs' boat and the big ship-in-a-bottle. However, Mr. Krabs says that crabs are stronger than woodchucks, throwing Sandy's submarine into the distance, making Sandy chase after it. Mr. Krabs goes back to driving to the contest.

At the contest, the judge checks SpongeBob's bottle. However, it does not have a ship. SpongeBob says that he is waiting for his ship to come in, as a joke, although Patrick dislikes the joke. Mr. Krabs finally gets to the contest, where he accidentally destroys the front of the place and all the ship-in-a-bottles competing because of his big ship-in-a-bottle. When the judge sees this catastrophe, he sees that Mr. Krabs' ship-in-a-bottle is quite impressive and that since it is the only one left, he would get rewarded with the trophy and the prize money.

However, Sandy, in her submarine, gets in the contest and destroys Mr. Krabs' big ship-in-a-bottle accidentally. She crashes into the fountain, where she falls out of her suit with her inside only her helmet as a ball, and rolls to the judge. Since she inside her helmet was the only contestant left, she was the one who won the contest. Back at the treedome, Sandy has made Mr. Krabs build a replacement tree for her until she grows a new one from a seed. When Mr. Krabs gets tired, Sandy forces him to work more by electrocuting him, as the episode ends. 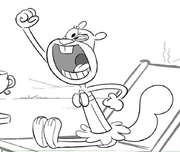