Encyclopedia SpongeBobia
Register
Don't have an account?
Sign In
Advertisement
in: Events, Galleries with low quality images, Marathons,
and 7 more

A marathon preceded two new episodes of All Grown Up!. No new SpongeBob episodes premiered.

Much like 2003, A marathon preceded two new episodes of All Grown Up! and The Fairly OddParents. No new SpongeBob episodes premiered.

During this 2006 event a wrestling-themed block called "W.A.C.K.!" (Wrestling Association of Championship Krushers) aired during the event, featuring Linsdey Shaw and Devon Werkheiser from Ned's Declassified School Survival Guide as the hosts. During the event only one episode premiered. The final episodes of The Adventures of Jimmy Neutron, Boy Genius aired, along with new episodes of The Fairly OddParents!, The X's, and All Grown Up. The block was originally slated to premiere next year but was quietly cancelled due to stunt problems.

All eight of these episodes premiered on November 23, 2007 as the last episodes from season 5. Promos for this event advertised four new SpongeBob episodes, while it was actually eight. Four of these episodes ("The Two Faces of Squidward," "The Inmates of Summer," "The Battle of Bikini Bottom," and "Banned in Bikini Bottom") were released on TurboNick on November 21, 2007, two days before they premiered on TV.[7]

All seven of these season 6 episodes premiered on November 28, 2008. A sneak peak of the DreamWorks animated series The Penguins of Madagascar based on the Madagascar franchise aired between the premieres of "Grooming Gary" and "Porous Pockets."

An airing of The SpongeBob SquarePants Movie on November 27, 2008. 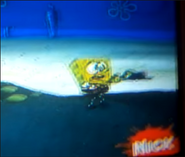 Two episodes premiered in 2009, less compared to the previous two years. The event was renamed to Super Stuffed Nicksgiving Weekend.

Two episodes premiered in 2010. Six additional episodes were originally going to premiere, but were pushed back to 2011.