"Giant Squidward"
"Sun Bleached" is a SpongeBob SquarePants episode from season 6. In this episode, SpongeBob accidentally gets too much of a tan.

SpongeBob and Patrick are playing at the beach, where all the other beach goers are tanning. Craig Mammalton, the tannest man on TV, then shows up and announces to a crowd that he is having the hottest party of the summer. Everyone is invited except for SpongeBob and Patrick, who are not tanned. Craig says that they cannot come if they do not get to the tan minimum and insults them for having smooth skin. Patrick converts his house into a tanning machine, able to give them the minimum tan in just 15 seconds. Patrick goes first and gets a perfect tan. But during SpongeBob's turn, Patrick forgets to watch over SpongeBob and leaves him in for 2 hours while he goes off with a group of girls. After Patrick finally lets him out, SpongeBob has ended up with a white "Sun Bleached" tan that dehydrates his skin. SpongeBob suggests asking Squidward for help, who ridicules him. SpongeBob feels sad because he will not be able to go to the party, but Patrick offers to help him however he can.

Patrick first gives him a "makeover" by covering him in mud, placing kelp jerky over his teeth, and putting hair on SpongeBob's head that was ripped from his armpits. While walking through town, a woman mistakes SpongeBob for a monster and attacks him to protect her baby. While having an ice cream break, Patrick gets an idea while eating his caramel sundae. He covers SpongeBob with the caramel, giving him a "tan." They are let into the party, where portable tanning lamps shine on the dancing partygoers, causing SpongeBob's caramel to harden. SpongeBob notices and tries to leave, but the oblivious Patrick makes the situation worse and directs everyone's attention to him. The caramel shell cracks, revealing his bleached skin.

The partygoers start to complain and make fun of him until Craig reveals on the tan scale, sun-bleached is the ultimate tan. SpongeBob is called a hero, thus making the partygoers praise SpongeBob. The tanning lamps are cranked to the maximum "Sun Bleach" level and everyone is dried up to dust. SpongeBob asks Patrick if too much sun is bad for them, to which he replies, "Whatever. I just go with the flow." 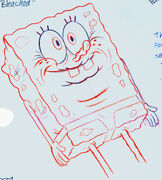 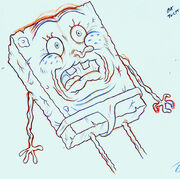 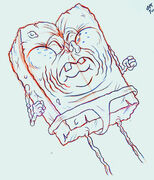 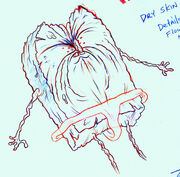 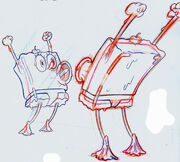