View source
If you were looking for the article about the disease, then see Suds (disease).

"Valentine's Day"
"Suds" is a SpongeBob SquarePants episode from season 1. In this episode, SpongeBob catches a sickness known as the "suds" after leaving his refrigerator open.

One night, SpongeBob has a dream about it raining Krabby Patties and realizes he is hungry. He gets up to make himself a Sea-Nut Butter and jellyfish jelly sandwich, but falls asleep after the first bite and leaves the refrigerator open, causing his entire house to freeze overweight. By morning, he develops the suds, an illness that causes him to sneeze bubbles. SpongeBob goes to work in spite of his illness, but Mr. Krabs learns from Gary that SpongeBob has the suds and orders his fry cook to go home and get some rest.

Back at home, SpongeBob decides he needs help and calls upon Sandy to take him to the doctor. Shortly after, he is visited by Patrick, who gives him a third-hand account of the doctor's office, describing it as a horrible place full of torture devices and old magazines. Terrified, SpongeBob asks Patrick to be his doctor instead. "Doctor" Patrick begins to practice on him, starting by plugging up all of SpongeBob's holes so bubbles will no longer come out. However, this causes SpongeBob to inflate every time he sneezes. SpongeBob thinks this "treatment" is helping (when it is attacking symptoms rather than the underlying condition, perhaps making it worse), to Patrick's joy. With this SpongeBob decides to call Sandy and tell her not to come, but his fingers are too big and puffy for the buttons. He then asks Patrick to call Sandy and tell her not to come. He does so, but Sandy does not think Patrick's "care" is effective and continues coming. Patrick then tells SpongeBob to hurry up and feel better or else Sandy will take him to the doctor. He tries several ineffective "cures" to SpongeBob's suds, including turning his foot into a seanut butter sandwich, yanking a tooth out, bouncing on him like a trampoline, repeatedly placing and removing a large band-aid and even drawing and quartering, by which time Sandy has arrived. SpongeBob sneezes one more time, this time turning him into a perfectly round ball.

Sandy demands Patrick open the door, but Patrick rolls SpongeBob out the back door and disguises the patient as a duplicate of his house. Sandy questions Patrick as to why he suddenly has two houses. Patrick replies that he has too much stuff for one. She then questions why his "second house" has feet, Patrick responding that it is his "mobile home." SpongeBob then sneezes again, revealing himself. Patrick claim the "dirt therapy" is working just fine. Sandy says that he has to see a real doctor, but Patrick refuses, telling SpongeBob to "say "ahh" to show Sandy he is fine but, when SpongeBob does so, his breath damages a small ecosystem, which shows Sandy that he is even worse than she thought. Sandy takes this as proof that SpongeBob needs to go to a doctor. Sandy and Patrick then squabble over SpongeBob and accidentally fling him into the air.

Patrick asserts that everything was fine before Sandy arrived; Sandy retorts that he should be arrested for impersonating a doctor (and lying to his best friend). SpongeBob, meanwhile, bounces away and at the last second, comes to a stop in front of the Krusty Krab. Soon enough, the pressure from his plugged-up holes reaches a tipping point, and he sneezes violently, blasting the corks out of his holes and releasing a massive amount of bubbles, destroying the Krusty Krab, much to Mr. Krabs' annoyance.

Sandy then takes SpongeBob to a real doctor, who prescribes the "sponge treatment," which is performed by a live human hand named Hans. This involves being rinsed with soap and used to scrub various objects and people, much to SpongeBob's delight. As Hans brings SpongeBob back to the clinic, the treatment cures him completely. SpongeBob exclaims that he loves the doctor, and he even receives a giant lollipop. Wanting a giant lollipop too, Patrick lies that he also has the suds, after blowing a bubble to prove it. The doctor's not fooled and he sarcastically assures "Doctor Patrick" that a "special treatment" awaits him. Hans returns, puts soap on Patrick, and uses him to clean a cactus and then a toilet, as punishment for lying to SpongeBob about the doctor being horrible and making SpongeBob's illness worse by impersonating a doctor. Patrick cries out, "Wait, this doesn't seem right!" as the screen fades to black, ending the episode. 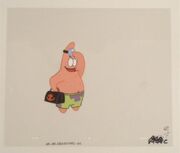 An unused cel featuring "Doctor" Patrick with a doctor's briefcase. 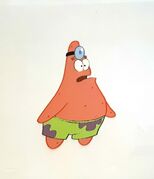 A trading card featuring an unused shot of one of SpongeBob's corked pores. 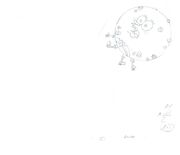 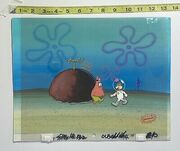