Start a Wiki
If you were looking for the article about the song, then see The Suction Cup Symphony.

"Suction Cup Symphony" is a SpongeBob SquarePants episode from season six. In this episode, Squidward writes a symphony.

One average day in Bikini Bottom, Squidward is playing his clarinet when SpongeBob goes outside to do some gardening. He thinks that Squidward went to an Italian restaurant called Mario's. Suddenly, SpongeBob notices two construction workers putting up a billboard. Thinking Squidward's music is flatulence, SpongeBob becomes noisy to cover it up until Squidward alerts him to stop. Getting mad at the billboard workers, he then discovers the Bikini Bottom Symphony Orchestra is holding a competition for an original score.

Following a series of events starting with Patrick breaking his buttocks, Squidward tries not to get distracted by SpongeBob's home doctoring. After turning in his score, he finds that he wrote down all of SpongeBob's doctoring. When it is Squidward's time to perform, he finds SpongeBob squeezing a rubber duck and Patrick going "Woo!" while SpongeBob is on a seat, bashing Patrick's brain, causing a flatulence noise and making his eyes pop out. All while Squidward is conducting the orchestra and barely paying attention to his conducting, due to SpongeBob and Patrick distracting him with their odd procedures to each other.

The audience gives a round of applause to Squidward, who is happy. SpongeBob says to make sure Squidward doesn't get a "swelled head." The camera cuts to only Squidward, whose head inflates due to Patrick squeezing the pump of the blood pressure, and the episode ends by the screen blacking out as an explosion is heard. 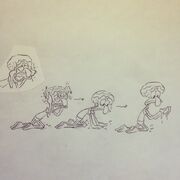 Retrieved from "https://spongebob.fandom.com/wiki/Suction_Cup_Symphony?oldid=3284063"
Community content is available under CC-BY-SA unless otherwise noted.