View source
If you were looking for the article about the writer, storyboard director and artist, then see Steve Fonti.
Person
Credits

2005 - 2012
Steven Craig Banks (born November 27, 1954; age 67) is a former SpongeBob SquarePants crew member. He was a secondary writer from season 4 - 8 and left the show following the eighth season. He is also the writer of numerous SpongeBob books. Outside of the series, he is an actor, musician, comedian, and writer.

SpongeBob producer Eric Coleman, called Banks to tell him he was being considered by executive producers Stephen Hillenburg and Paul Tibbitt to become a writer on the show. Banks was already a huge fan of the show and described the hiring process as being interviewed by Paul Tibbitt for about five minutes. Banks was nominated for an Emmy in 2008 for the episode he wrote, "The Two Faces of Squidward."

In 1987, Banks landed his first acting role, performing as a minor character in the fantasy-comedy Date with an Angel.

Banks hit it big when he developed (and starred in) a one-man theatrical show titled Home Entertainment Center – a comedic play about an easily distracted procrastinator trying to meet a work deadline. He gave 440 performances of Home Entertainment Center at venues like the Canon Theater, Pasadena Playhouse, Marines' Memorial Theater, and The One Act in San Francisco (where the show ran for eleven months). For his performances, he was awarded the LA Weekly Theater Award, four Drama-Logue Awards, and three San Francisco Bay Area Critic's Awards. He also performed at the Aspen Comedy festival, the Cast Theater, Callboard Theater, and Las Palmas Theater.

In 1989, Home Entertainment Center achieved national fame when it was filmed and aired on Showtime; the filming was done at the Marines' Memorial Theater. The show featured original songs written and performed by Banks. On May 14, 1989, he appeared (with Penn Jillette) on the Dr. Demento radio program (that year's Mother's Day Special) and performed a number of his songs live on-air.

The ensuing fame landed him a TV pilot on Showtime in January 1991 – The Steven Banks Show (sometimes inaccurately referenced as The Steven Brooks Show). The plot of the show was much the same as his one-act play: Banks portrayed Steven Brooks – an underachieving, chronic procrastinator fascinated by trivia and cursed with a penchant for comedic songs.

Showtime aired the pilot for Banks' show but never ran any other episodes. In 1994, PBS took an interest in his act. They filmed and aired The Steven Banks Show that summer – the first original sitcom ever produced and run by PBS. Brandon Tartikoff produced the show, filmed at WYES in New Orleans. A CD album for the show was also released, consisting of original songs written and performed by Banks. Thirteen episodes were shot and the program garnered critical acclaim, but one episode, "Miss Janie Regrets," was not aired due to controversy over a PBS-like children's show parody. Banks' show has attained a kind of cult status despite its short run on PBS. In one episode, Penn Jillette sang and played guitar, Teller on the keyboard, joining Steven Banks. The song was "I wear the clothes of the dead," the setup for which was Penn wearing suits bought at estate sales.

Banks has appeared in movies and several TV shows such as Beverly Hills Cop III, Dharma & Greg, King of the Hill, Dream On, Caroline in the City, Jimmy Kimmel Live!, Parks and Recreation, Mom, and Crazy Ex-Girlfriend.

In 1998, Banks began writing for Nickelodeon's animated series CatDog. He wrote several CatDog books as well. He continued working for Nickelodeon, penning several SpongeBob books (including The Big Halloween Scare, which actually charted on The New York Times bestseller list). In 2002, Banks was named head writer for The Adventures of Jimmy Neutron, Boy Genius, and in 2004, he was nominated for one of the 56th Annual Writers Guild Awards for the episode Rescue Jet Fusion.

In 2004, he wrote for Hi Hi Puffy AmiYumi, an animated series from the Cartoon Network about the adventures of real-life J-pop music stars Ami Onuki and Yumi Yoshimura. Banks and Penn Jillette also collaborated in writing Love Tapes – an unconventional love story for the stage which premiered February 2005 at Sacred Fools Theater in Hollywood.

In 2009, he collaborated with the dance company Pilobolus co-creating a full-evening piece, Shadowland, currently touring internationally.

He developed the CGI series and wrote the pilot for Nickelodeon's Planet Sheen.

His play, Looking at Christmas, opened in New York at The Flea Theater on November 20, 2010, and was filmed by a local television station WNET. That play aired on WNET the following year in December 2011.

He wrote the pilot for the Arnold Schwarzenegger / Stan Lee animated series The Governator.

In 2012, he wrote the pilot for a new updated version of the 1960s animated classic Underdog for Red Kite Animation, and co-developed Supernuts! with Niki Yang for Nickelodeon.

In October 2012, he joined the staff of Two and a Half Men as Co-Producer.

In 2013, he wrote a one-hour dramedy pilot called A Beautiful Mess for Chuck Lorre Productions.

He co-created and directed, with Pilobolus, Shadowland, which has been performed in 31 countries and sold over 500,000 tickets. It is currently touring the US. A new full-evening piece, Shadowland II: The Adventure Continues, premiered in Berlin in 2016.

His play Looking at Christmas was published by Broadway Play Publishing in 2016. In 2016, he was also the head writer for Genius Brands' SpacePOP series.

As of 2017, Banks is developing an adult animated action/comedy project for Sony Pictures Animation and Netflix about a very famous rock and roll star who faked his own death in 1977 and became a secret agent.

As of 2018, Banks is consulting/writing on a Lego animated series project.

His original book series, Middle School Bites, published by Holiday House, distributed by Penguin Random House came out in 2020. There are three books in the series.

In April 2021, Banks served as a head writer on the animated streaming series Superhero Kindergarten writing all 26 episodes. 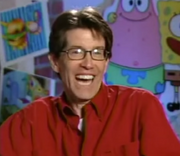