View source
If you were looking for the article about the VHS, then see Squirrel Jokes (VHS).

"Pressure"
"Squirrel Jokes" is a SpongeBob SquarePants episode from season 2. In this episode, SpongeBob tells jokes that offend Sandy, yet amuse everyone else.

In the beginning of the episode, the Krusty Krab has begun a nightly event called the "Komedy Krab," featuring some of Bikini Bottom's best comedians. SpongeBob's chance to take the stage arrives, but his planned job-centered routine, featuring weak jokes about mundane topics such as salt, tomatoes, and forks, does not go over well. As the hecklers jeer, SpongeBob tries to make a witty observation, anything to get a laugh. He notices Sandy's buck teeth and starts joking about them, which earns chuckles from the audience. SpongeBob begins telling more "squirrel jokes" about how smelly and stupid squirrels supposedly are. The entire crowd roars with laughter, all except Sandy. After his act, Sandy confronts SpongeBob backstage and tells him that his jokes are hurtful, but he insists that it is just an act and assures her that "Everyone knows you're the smartest creature in Bikini Bottom."

The next day, it turns out that everyone has taken the jokes to heart and either avoids or ridicules Sandy. She talks with SpongeBob again on the next night of the Komedy Krab, explaining how the jokes are affecting her public image, and she asks him to use some of his other jokes instead. Fearing his original jokes will not cut the mustard, SpongeBob gives it a shot anyway, but to no avail: the crowd wants squirrel jokes. SpongeBob quietly leaves the stage, seemingly for good. In the next moment, he bursts back on stage with an epiphany, fake buck teeth and a stereotypical Southern accent, resuming the squirrel jokes with aplomb.

After the performance, SpongeBob finds a note from Sandy, stating that she has finally realized how funny his jokes are and to come to her treedome to celebrate. When he visits her, however, Sandy looks and acts exactly as his jokes make her out to be: an idiotic, clueless yokel.

Sandy has SpongeBob literally glued to his seat so he will not fall off and removes his water helmet to serve as a vase for the flowers. When SpongeBob starts to dehydrate, he begs for water, so Sandy pops a hose in his mouth to fill him up. Only after SpongeBob has expanded to fill every inch of the treedome does he promise to quit telling squirrel jokes.

At the following Komedy Krab event, SpongeBob tells a single, toned-down squirrel joke. He then springboards into making fun of everyone else, including sponges, fish, and crabs. The crowd jovially laughs at themselves. SpongeBob and Sandy give each other thumbs up, affirming their restored friendship, as SpongeBob jokes the night away as he prepares to joke about starfish, ending the episode. 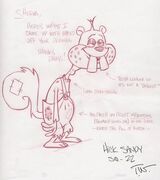 Unused Close Up Of Sandy’s Teeth

"I started out as a stand up comedian, so it was fun to perform as the kind of schlockmeister I strove not to be. Stand ups are always fighting between doing more original material or repeating what works. SpongeBob goes for the pander, without thinking about the feelings of the person disparaged by his material."