"The Chaperone"
"Squidward the Unfriendly Ghost" is a SpongeBob SquarePants episode from season 1. In this episode, Squidward pretends to be a ghost after SpongeBob and Patrick think he has died.

Squidward has just finished a wax sculpture of himself and declares that he has "conquered all artistic media." He is annoyed by SpongeBob and Patrick, who are playing a loud game, and goes to take a bath. SpongeBob and Patrick begin tossing around a shell, but it flies into Squidward's house and knocks over the wax sculpture. The two think they have injured Squidward, and after several humorous attempts to "resuscitate" him, they believe that Squidward has perished.

Having finished his bath, Squidward dramatically emerges from the bathroom in a rush of steam, wearing talcum powder and a white bathrobe. SpongeBob and Patrick believe that they are seeing Squidward's ghost, and, hoping to evade his "ghostly anger," promise that they will do anything he says. Squidward, instead of telling them he is not dead, gleefully plays along in order to have them pamper him and do his chores.

When instructed to clean out one of Squidward's "messy" rooms, the two come across a comic book about the Flying Dutchman, who haunts the seas because his body was used as a window display in a clothing store and was never put to rest. They decide that since Squidward is a vengeful spirit, they must put him to rest. Despite Squidward's protests, SpongeBob and Patrick arrange a proper burial for him and invite people over to mourn him.

Squidward eventually admits his charade, but SpongeBob and Patrick believe that he is simply in denial about his death. SpongeBob blows a giant bubble that encapsulates Squidward and sends him floating right out of the water, up to "the great beyond." Squidward is last seen high in the air and surrounded by seagulls, which only adds to his discomfort.

SpongeBob and Patrick playing outside. 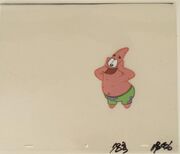 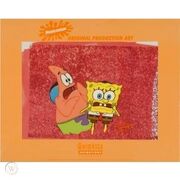 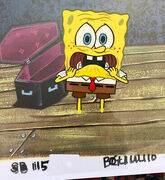