"Squiditis" is a SpongeBob SquarePants episode from season eight. In this episode, SpongeBob fears he has caught Squidward's illness.

Squidward fantasizes about being outside on a nice day, but in reality, he is stuck working at the Krusty Krab. While talking to SpongeBob, he then gets the idea to fake being sick to get away from him. He tells SpongeBob that he has a scratchy throat, a dry mouth, and an itchy eye. He dubs it as "Squid's Disease," and SpongeBob worries that he will catch it. He suggests that Squidward goes home to get better. Squidward goes to Mr. Krabs to tell him he is sick, so Mr. Krabs checks him out. He concludes that Squidward is fine and healthy, and then tells him to get back to work. 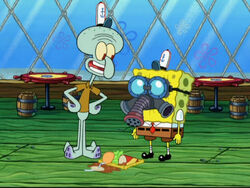 When SpongeBob prepares to deliver an order, Squidward notices him wearing a gas mask. Squidward coughs into it, so SpongeBob panics. He goes to Mr. Krabs to tell him Squidward is sick, but Mr. Krabs is not convinced. He notices SpongeBob is acting odd, which is affecting business. He learns it is because he thinks Squidward is ill and is afraid to catch it. Then he suggests Squidward "make him scarce." Squidward mirthfully leaves, and SpongeBob is relieved...until he notices his eye itches, his throat feels scratchy, and his mouth is dry. Using home remedies, SpongeBob soaks his feet in hot water, then freezing ice water, then boiling oil. Then he smears hot mustard onto his fried legs, which hurts. He plans to put cucumbers on his wounded legs, but only sees pickles. Concluding they are cucumbers, he dumps the pickles and their vinegar onto his legs. The vinegar burns his legs and he falls all over the place, into a pile of garbage. SpongeBob delivers an order while covered in garbage. The customers are turned off by the sickly employee and leave, prompting Mr. Krabs to tell SpongeBob to go home until he feels better. SpongeBob asks who will work while he is away, and Mr. Krabs boasts that he can do all the work blindfolded with one claw tied behind his back.

Squidward lies on a beach chair, enjoying his break, when a garbage-covered SpongeBob comes along. Squidward is annoyed, and then goes into his house to at least enjoy himself inside. But SpongeBob goes in with him, and presents a video tape with a romantic comedy on it. Squidward immediately gets angry at SpongeBob. At the Krusty Krab, Mr. Krabs is having a hard time fulfilling orders, and angers customers by throwing food at them and all over the place. Back at Squidward's home, the movie is over. But when SpongeBob says there are 99 more sequels to watch, Squidward cannot take it anymore and runs out, screaming. SpongeBob follows him to the Krusty Krab, where Mr. Krabs lies on the ground, covered with Krabby Patty pieces, woozily telling SpongeBob that he could take care of everything. Noticing Mr. Krabs is not feeling good, SpongeBob presents him with the video tape of the romantic comedy. The episode ends with Mr. Krabs telling him to get away and runs away from him.

Retrieved from "https://spongebob.fandom.com/wiki/Squiditis?oldid=3065086"
Community content is available under CC-BY-SA unless otherwise noted.