Changes: Squid Plus One

Back to page
View source

However, Squidward calls the protein "glop" and starts to mock people that drink them. An enraged Larry smashes Squidward into the ground and walks off. Squidward is saddened but SpongeBob appears and helps him out of the hole. Squidward thanks SpongeBob for helping him out of the hole and SpongeBob says he'll do anything for a friend. Upon hearing that, Squidward asks SpongeBob to go with him to the gallery show and SpongeBob gasps in excitement. However, at Galleria Diphteria, it turns out Squidward ends up going with a reflection of himself in the mirror (With SpongeBob in a black suit carrying the mirror around) with Perch Perkins remarking it is "sad." Squidward then tells his reflection that he will always be his "plus one." 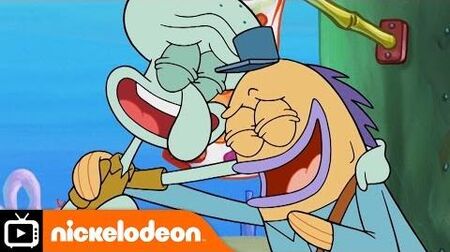