"The Executive Treatment"
"Squid Plus One" is a SpongeBob SquarePants episode from season 9. In this episode, Squidward receives an invitation to a gallery opening and scrambles to find a friend to take with him, but only SpongeBob is intent on going.

One afternoon at Squidward's house, Squidward is seen preparing for his day, until he hears his doorbell ring. When Squidward answers the door, he finds SpongeBob there, who asks what he is doing. Squidward replies that he is busy, but SpongeBob wonders why he is busy. Squidward says he is going to spend quality time with someone important and slams the door on SpongeBob before continuing to enjoy his afternoon. However, his door rings again and, thinking it is SpongeBob, accidentally yells at a mailman. Squidward then takes the mail and it is revealed as an invitation to the Galleria Diphteria. However, Squidward notices some words at the bottom and the mailman says he can bring someone to go along. SpongeBob is eager to go, but Squidward declines the offer and slams the door on SpongeBob yet again, leaving him sad and dejected as he goes off to play with his jump rope.

A little later, Squidward is trying to find some friends to take to the Galleria Diphteria, but is having some trouble. Squidward gets an idea after seeing SpongeBob run outside with a jump rope and runs outside to ask him. SpongeBob believes Squidward is going to ask him to go to the art gallery opening, but Squidward just asks him where the mailman went. SpongeBob tells him he went over to Widow Duncan's house, and Squidward runs off toward the house, as SpongeBob dejectedly walks away. Squidward finds the mailman, who is in the middle of delivering a package. The two of them figure out they have most things in common and they say what they hate most in unison. Squidward tells the mailman that it is SpongeBob, but the mailman tells Squidward that it is clarinets, leaving him shocked. As the mailman continues talking about why he hates clarinets, Squidward is already gone. The mailman (revealing himself as Norton) hits himself, thinking he is too opinionated.

Later, Squidward is seen walking in town and picks up a can belonging to SpongeBob. Squidward wants to tell SpongeBob something important, SpongeBob thinking he's going to ask him to go to the gala with him, but it turns out he just wants to talk to Larry. At the beach, Squidward tries to ask Larry to go to the art gallery with him, but Larry manages to convince Squidward to go riding on a jet ski instead. Squidward and Larry go riding around into the carnival and eventually do other activities such as playing pool, going to the movies, and playing instruments together. Squidward replies to Larry that he met someone earlier that did not like clarinet music and Larry agrees with him. Squidward asks Larry if he would go to the gallery opening later and Larry agrees, but he only wants to make a protein shake first.

However, Squidward calls the protein "glop" and starts to mock people that drink them. An enraged Larry smashes Squidward into the ground and walks off. Squidward is saddened, but SpongeBob appears and helps him out of the hole. Squidward thanks SpongeBob and SpongeBob says he will do anything for a friend. Upon hearing that, Squidward sees his reflection in SpongeBob's eyes and "asks" him to go with him to the gallery show and SpongeBob gasps in excitement. However, at Galleria Diphteria, it turns out Squidward ends up going with a reflection of himself in the mirror (with SpongeBob in a black suit carrying the mirror around), with Perch Perkins remarking it is "a thing about sadness." Squidward then tells his reflection that he will always be his "plus one."

Vincent Waller confirmed the episode on Twitter on August 10, 2015.[3] 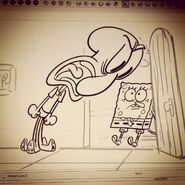