This is the page about Squeaky Boots. If you were looking for the article about the boots, then see Squeaky boots (item).

"Squeaky Boots" is a SpongeBob SquarePants episode from season one. In this episode, SpongeBob buys boots from Mr. Krabs, which causes an annoying squeaky sound.

On Pearl's birthday, Mr. Krabs attempts to cheaply entertain her party guests. When this does not receive a warm reception, he moves on to presenting Pearl with his present. She opens the package, eagerly hoping for a pair of the popular flipper slippers all her friends wear. What she finds instead is a pair of rubber fishing boots, a real bargain for Mr. Krabs but a mortifying gift for her.

SpongeBob takes to the squeaky new boots immediately, much to the annoyance of Squidward. To Mr. Krabs' ears, the boots merely make the sound of money. That night, Mr. Krabs begins to dream about the cash lining his register, but the sounds of squeaking invade his slumber. He wakes to realize it's his window making the sound, but as he goes to close it, he steps into a knothole, breaks his leg literally in two and falls outside.

Sneaking into SpongeBob's house under cover of darkness, Mr. Krabs slips off the boots from the sleeping SpongeBob's feet and brings them back to the Krusty Krab to hide. The next morning, Mr. Krabs is sitting peacefully with his dollar bills when a sobbing SpongeBob enters, apologizing for losing the precious boots. Mr. Krabs attempts to console him with "magic oven mitts," but they do nothing to heal SpongeBob's pain. Unsure of what else to do, Mr. Krabs takes a customer's order. However, the order comes out as a series of squeaks. Horrified, Mr. Krabs soon hears everyone and everything making the dreaded sound.

Driven to madness, Mr. Krabs confesses that he hid the boots underneath the restaurant's floorboards. He pulls the boots out, takes them to the kitchen and dips them into the fryer before devouring the shriveled footwear. Satisfied, he tells the mystified SpongeBob that he doesn't need special boots to be a great fry cook as he already is one, and so gives SpongeBob his long-overdue paycheck, stopping short of giving him an extra bonus.

Mr. Krabs then heads off on a week-long vacation with Pearl, having finally bought her a pair of Flipper Slippers for the trip. Much to his dismay, a tell-tale squeak starts hiccuping from him as he drives and continues all the way down the road. 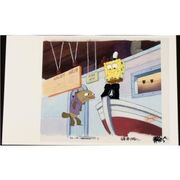 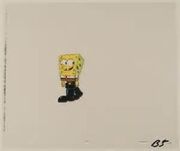 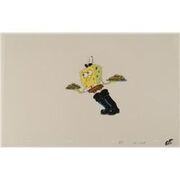 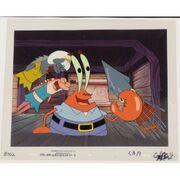 Mr. Krabs talks to Pearl whilst Pearl's friends lunge themselves in the air towards him. - Great Animation Cels 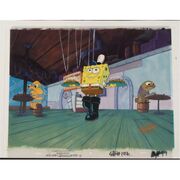 Retrieved from "https://spongebob.fandom.com/wiki/Squeaky_Boots?oldid=2215393"
Community content is available under CC-BY-SA unless otherwise noted.