SpynjBob Pantsgwâr is the Welsh dub of SpongeBob SquarePants. Episodes are dubbed into Welsh and are aired on the UK's Welsh language channel, S4C. It forms part of Stwnsh, a segment that is dedicated to older kids and teenagers. The show first aired on September 7, 2011.

The dub is produced by Tinopolis. It is part of International SpongeBob SquarePants.

In the Welsh dub, the episodes are not in the same order as in other languages. Additionally, only certain episodes from season 4, season 5, and season 6 have been dubbed into Welsh.[1]

Most bubble transitions have been changed to this.

The first part of the warning sign from "Roller Cowards"

The rest of it

3 Hours Later from Breath of Fresh Squidward (NOTE: it uses the background from One Minute Thirty Seven Seconds Later) 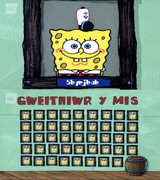 Employee of the Month from Breath of Fresh Squidward

Cake from Breath of Fresh Squidward

Cake from Breath of Fresh Squidward (Squidward's Name on it)

The calendar note from The Krusty Sponge

The Epilogue from Slimy Dancing

The Judges from Slimy Dancing

Closeup of the entrance

The Comic Ad from Sing a Song of Patrick

Since the show is made in Wales in Britain, they use the British currency, Pounds "£"

The Next Day from Sing a Song of Patrick

Bigshot Records from Sing a Song of Patrick

"Welcomandy" from A Flea in Her Dome 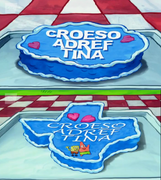 The Cake from A Flea in Her Dome

The Welcome Home greeting from A Flea in Her Dome

Emergency Escape from A Flea in Her Dome

Zoom Out Of The Krusty Krab From Blackened Sponge

Inscription on the Shirt from Krabby Road

One Week Later from Krabby Road

The Secret Formula from Krabby Road

Secret Krabby Sauce From Not Normal

Floor It From Gone

Bus Stop from "Not Normal."

Bikini Bottom Zoo From "Not Normal"

Bikini Bottom Dock & Shipyard from "The Inmates of Summer."

3 days later from "The Inmates of Summer."

Opening night from "The Inmates of Summer."

Summer island member list from "The Inmates of Summer."

"Three Weeks Later..." from Not Normal
Add a photo to this gallery

SpongeBob in Welsh - The Best Day Ever

Retrieved from "https://spongebob.fandom.com/wiki/SpynjBob_Pantsgwâr?oldid=3413311"
Community content is available under CC-BY-SA unless otherwise noted.