"The Getaway"
"Sportz?" is a SpongeBob SquarePants episode from Season 10. In this episode, Squidward invents a new sport to get back at SpongeBob and Patrick for annoying him, until Sandy catches on.

The episode begins with SpongeBob taking out the trash. Meanwhile, a package falls out of a mail truck and onto SpongeBob's lawn. Patrick and SpongeBob wonder what is inside. SpongeBob looks for an address, but he does not see one. Patrick opens the package, and they find a bunch of sports equipment in the package. However, SpongeBob and Patrick are not sure what the equipment does, so they decide to test out the stuff.

While they are having the big tournament, Sandy is looking for her sports equipment. She finds the package, but it does not have her sports equipment. Sandy hears the big tournament and walks there to ask SpongeBob and Patrick what is going on. SpongeBob says that he and Patrick are in the middle of a sports game. Sandy says this is not any sports game she has ever seen before. SpongeBob says it is kickboxing, while Sandy says that whatever they are playing, it is causing them a lot of pain, but SpongeBob and Patrick will not stop playing because they are in a middle of a tie.

The Rule Giver comes out. Sandy goes to The Rule Giver and then realizes it is Squidward. The latter prefers "King of Sportz." Sandy realizes that Squidward is making a game where SpongeBob and Patrick get hurt and will not let them stop. Squidward says that he is just giving the people what they want. Sandy makes an effort to put a stop to this because SpongeBob and Patrick are getting severely injured.

Squidward resumes the game, and Sandy challenges him to a game of basketball, but the former refuses. The people say they want him to play, so he ends up doing so. The first round is basketball. Sandy wins this round and Squidward says it was a foul. Sandy, however, calls him out on this, telling him to go tell that to his mother. Squidward then goes to his mother, but she does not want to hear it.

The second round is soccer. Sandy wins again. The third round is football. Sandy wins for the third time in a row. The fourth round is pool, which Sandy wins. Sandy is the winner of sports.

Since Squidward got hurt throughout the game, he becomes just as injured as SpongeBob and Patrick did. The pair come to talk about the game she and Squidward had. Sandy ends their game and says that they are both winners. She then gives all three of them a big hug. She hugs them so hard that Squidward's head pops and his eyes fall out of him.

Promotional art for this episode. 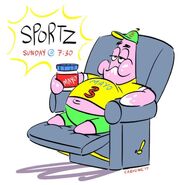 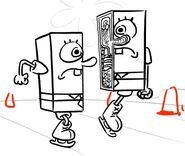