View source
If you were looking for the article about the DVD, then see Spongicus (DVD).

"Suction Cup Symphony"
"Spongicus" is a SpongeBob SquarePants episode from season 6. In this episode, Plankton builds a coliseum and holds a gladiator show, but SpongeBob interferes when he finds out Patrick is involved.

In the beginning of the episode, Plankton decides to destroy the Chum Bucket and turns it into a coliseum, announcing to Bikini Bottom on a jumbotron that there will be free entertainment, promising guts, and glory available to everyone in now what is called the Chum Coliseum. The coliseum is a spoof of the Roman arena with its battles and gladiatorial games, complete with Plankton in the Emperor's chair and a toga. Soon, the Krusty Krab is devoid of its loyal customers, and Mr. Krabs and the crew go to the coliseum to find out what Plankton is up to. When they sit down, a giant lionfish is released and SpongeBob is excited about who will get mauled until he realizes the prisoner that will be going up against the lionfish is Patrick. To entice the lionfish into chasing Patrick, Plankton orders blood sausages to be placed around Patrick's throat. SpongeBob decides to help Patrick and turns into a gladiator, complete with armor and a chariot pulled by seahorses.

He soon catches up with Patrick and rescues him, but now the entertainment has turned into a chase scene that does not contain the blood and guts Plankton promises, even when Betsy Krabs wants to see "body parts." Meanwhile, Plankton is trying to sell chum to the crowd who are getting hungry waiting for the guts and glory. One of the spectators agrees to buy a chum stick, but is angered when Plankton tells her it will be $10. She angrily asks why she should pay $10 when Krabby Patties are only a single buck, which the overhearing Mr. Krabs agrees to. Plankton angrily tells her "You can't get entertainment like this at the Krusty Krab!" and states that the fight will be off unless she pays $10. She agrees and immediately gets sick from eating the chum stick, while the rest of the crowd, having had enough, get up to go. Plankton traps all of the customers by blocking off all the exits when they try to leave. He claims to have waited 20 years to see the number of customers Mr. Krabs sees every day and demands everyone to sit back down and buy his chum. They sit back down grumbling and the entertainment continues.

Going back to SpongeBob and Patrick, SpongeBob discovers that the Lion Fish is chasing the blood sausages around Patrick's neck, not him, after witnessing the Lion Fish eat a sausage that was thrown on the ground. He throws the rest of the blood sausages and they land in a pile on Plankton. He freaks out, now realizing the Lion Fish is charging towards him. He quickly escapes out of a secret door he had placed in the coliseum, taunting the Sea Lion and calling it a "prissy feline." The Lion Fish smashes through the wall and chases Plankton, who runs for his life. After Plankton's failed plans, the Krusty Krab is back in business, but Mr. Krabs has raised the price of a Krabby Patty from $1 to $10. When a customer complains about it, Mr. Krabs points to the Lion Fish and tells him he can talk it up with his new "financial advisor." The scared customer then complies and orders the patty.

Mr. Krabs, SpongeBob, Patrick, and Squidward laugh altogether and then leave rather awkwardly one by one, as the episode ends with the lionfish roaring at the audience/viewers. 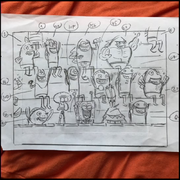