Encyclopedia SpongeBobia
Register
Don't have an account?
Sign In
Advertisement
in: Books, Articles in need of cleanup

Later that night, SpongeBob cannot sleep. He sees things and gets scared with things like Gary's snoring. Eventually, SpongeBob falls asleep. However, he is awoken by a loud noise. He runs to his living room to see what happened. He looks outside and sees a giant, shiny shoe. SpongeBob hears a rumbling and his room comes off. SpongeBob sees a giant monster that looks like him. The monster roars. He grabs for SpongeBob. SpongeBob screams.

Patrick thinks that they made Spongezilla mad. Spongezilla roars and he stomps his foot. SpongeBob tells Patrick to make Spongezilla look at Patrick. Patrick asks why he has to do that. SpongeBob says that it is because it is time for Plan B. He hurries into the Krusty Krab.

Spongezilla turns and grabs the Krusty Krab. It picks up the restaurant and shakes it upside down over its mouth. SpongeBob says that Spongezilla wants more Krabby Patties. Patrick asks what they are going to do.

SpongeBob thinks for a moment. A guy in a Krabby Patty suit runs by. SpongeBob says, "Excuse me," to the guy. He then asks where the guy got the costume. He says that Mr. Krabs hired him to wear it and hand out flyers for the Krusty Krab. He then says that he is running because the monster was not part of the deal. SpongeBob asks the guy if he can borrow the suit. The guy tells SpongeBob, "Take it! We're doomed anyway!"

SpongeBob puts on the Krabby Patty suit. Patrick says that he does not like this, while he looks at the crushed jellyfish net. SpongeBob agrees with Patrick. However, he adds that he is the town's only hope. Patrick says that he means that he did not like what Spongezilla did to the net. SpongeBob sarcastically thanks Patrick for his concern. He then says that he is off to lead Spongezilla away from Bikini Bottom before it destroys the entire town. Patrick tells SpongeBob, "Good luck, SpongeBob. You look really brave... and you look good enough to eat, too."

As soon as Spongezilla sees SpongeBob, it licks its lips and takes off after him. SpongeBob runs as fast as he can. He runs past Mrs. Puff's Boating School and Jellyfish Fields. Spongezilla was gaining on SpongeBob because each of Spongezilla's steps were ten times bigger than SpongeBob's steps.

Spongezilla catches up to SpongeBob. It grabs SpongeBob and dangles SpongeBob over its mouth. SpongeBob pleaded that the monster would not eat him. However, Spongezilla did not listen. The next thing SpongeBob knew he was falling.

SpongeBob pleads for his life. A familiar voice says, "Hey, SpongeBob, wake up!" SpongeBob opens his eyes, expecting to see the gaping mouth of Spongezilla. Instead, he found himself on his bedroom floor, looking at Patrick. Patrick says that he thinks SpongeBob was having a nightmare. SpongeBob says that he was. He then says that he thinks that the movies from earlier were scaring him a little bit. Patrick lies and says, "Uh, yeah, that's why I came by to check on you."

Patrick suggests that next Halloween they can go trick-or-treating instead. SpongeBob agrees and says that he has the perfect costume. He is thinking of the Krabby Patty outfit. 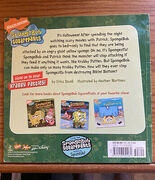