View source
If you were looking for the article about the VHS, then see Sponge for Hire (VHS).

July 6, 2006[1]
Sponge for Hire is a SpongeBob SquarePants DVD that was released on November 2, 2004 and contains eight episodes from season 3. It is based on the episode "Krusty Krab Training Video." 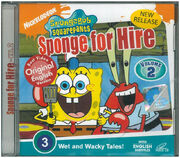