Encyclopedia SpongeBobia
Register
Don't have an account?
Sign In
Advertisement
in: Objects, Food, SpongeBob SquarePants vs. The Big One

Cooking Contest
Sponge cake is a food item that appears in the episodes "To Save a Squirrel" and "InSPONGEiac," as well as the video game SpongeBob vs. The Big One: Beach Party Cook-Off and the online game Cooking Contest, though it is first mentioned in "Blackened Sponge."

It has a light yellow exterior, and, according to Patrick, it has a white creamy filling inside, which is seen in "InSPONGEiac."

They appear to be part of SpongeBob with green frosting on them.

Patrick deems himself so hungry that he could eat a sponge cake. SpongeBob runs away in horror upon the syllable pause in between the words "sponge" and "cake," after which it turns out that Patrick just wanted to share a sponge cake with him.

Patrick imagines SpongeBob as a sponge cake and bites his hand thinking he is one, before realizing that it is him.

Sponge cakes appear as a dessert item on the menu. To make one, the player has to juice, melt, deep-fry, and paint in that order.

It is one of the foods to make. 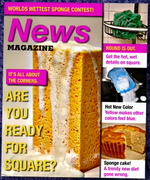