View source
Not to be confused with Robot SpongeBob.
If you were looking for the article about the present counterpart, then see SpongeBob SquarePants (character).
Object
Gallery

Every other known SquarePants family member

SpongeBob SquarePants Through the Wormhole

When Squidward arrives in the future, he shortly meets some SpongeTrons and PatTron in the kitchen area of the Krusty Krab, where the SpongeTrons work. There are 487 SpongeTrons, the official SpongeTron and one for each of the 486 other letters of the alphabet. They are all voiced by Tom Kenny.

His overall character is like SpongeBob's, but when he turns fully robotic, he turns in perfect square form with square eyes and a square nose and holes.

SpongeTron's best friend is PatTron, a two-headed descendant of Patrick Star, and they all love jellyfishing, just like SpongeBob does.

SpongeTron meets Squidward frozen when he was stuck during the freezer for 2000 years. SpongeTron only met Squidward for a short amount of time. He burned the ice that frozed Squidward with Squidward being paralyzed. He then helps Squidward find the time machine in the Krusty Krab with the first one being the can opener but later, he founded the right time machine.

He is first seen when Squidward arrives in the future. He makes a computer click sound to turn robotic.

SpongeTron's legs double as rockets, which allows him to hover over the floor. He can also pull their ties to make a robotic arm come out of their hats, holding a brick that they then will drop. The original SpongeTron has been known to boast a chrome hammer that emits a red laser beam. He uses this to free Squidward from a block of ice.

SpongeTron greets Squidward, who initially mistakes him for SpongeBob until being told otherwise. He then tells Squidward that he is in the future and tells him everything is chrome in his time. After Squidward confirms his whereabouts in the future, SpongeTron introduces Squidward to his clones, who he is shocked to see, since there are more lookalikes of his former neighbor. When Squidward voices that he needs to do something, the clones pull out their jellyfishing nets and excitedly yell "Jellyfishing!" At that moment, their best friend PatTron appears and SpongeTron greeted him.

After Squidward voices his desire to return to his own time, SpongeTron then directs him to the time machine and watch him leave while also waving goodbye.

SpongeTron briefly appears during the song "When Worlds Collide" in stock footage from "SB-129." 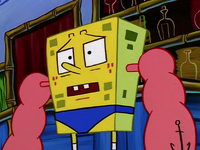