View source
This is the page about the episode. For other uses, see SpongeGuard on Duty (disambiguation).

"Club SpongeBob"
"SpongeGuard on Duty" is a SpongeBob SquarePants episode from season 3. In this episode, SpongeBob becomes a lifeguard at Goo Lagoon and closes it down, but he can't swim and has to find a way to rescue Patrick when he starts to drown in the lagoon.

One day at Goo Lagoon, SpongeBob and Patrick are sunbathing. SpongeBob notices the adoration that the lifeguard, Larry the Lobster, receives, and fantasizes about how "cool" it would be if he was a lifeguard himself, but Patrick has no fondness for lifeguards. After being told to conceal his large gut by another beach-goer, Patrick stomps off to the snack bar. SpongeBob declares that he is already as cool as Larry and that nothing but an airborne ice cream truck striking him down could prove otherwise.

One such collision later, Larry helps SpongeBob up and sees that vanilla ice cream has been smeared on his nose. Thinking that it is sunscreen and that therefore he is a lifeguard, Larry enlists the all-too-eager SpongeBob in helping him with his duties. As a lifeguard, SpongeBob becomes very popular and does many fun activities, and is happy to accept taking the second shift solo. However, Larry hears a swimmer drowning and saves him, causing SpongeBob to realize too late that the role of a lifeguard is a serious one that involves rescuing people from mortal danger.

His shift now over, Larry heads off for the tanning booth, leaving SpongeBob, who cannot swim, in charge of the beach. SpongeBob tries to laugh off his fears, but cannot help but imagine the sea of swimmers in the lagoon as a sea of tombstones instead. In a panic, he alerts all the fish to an "emergency" and orders them out of the lagoon. When asked what is happening, he claims that sharks have infested the lagoon, a comment that does not sit well with a family of sapient sharks in the crowd. He then raves about a sea monster, and is then confronted by an actual sea monster who slaps SpongeBob in the face. The frustrated crowd then disperses and heads back to the lagoon, much to SpongeBob's dismay.

Stressed out from watching the beach-goers engaging in risky activities, SpongeBob resorts to luring everyone out of the lagoon with free ice cream. Once everyone has some to eat, SpongeBob points out that they must now wait one hour to re-enter the lagoon, and binds them with police tape to enforce this rule. Patrick, who has been in the restroom, runs out in search of ice cream when SpongeBob gloats about how his trick makes him superior to Larry. Misreading the police tape as a sign for ice cream, he breaks through it to go into the lagoon, where he gets cramps and starts drowning.

While the crowd tries to alert SpongeBob to this real emergency, he initially refuses to believe them. However, he eventually sees Patrick and springs into action, desperate to find a way to save him without having to swim. He confiscates a boatmobile from a couple in the parking lot, though he returns their hotdog. SpongeBob rows the boat out to the lagoon, but the frantic Patrick tears it apart while flailing his arms. Upon realizing his actions, he and SpongeBob both start drowning, with Patrick actively harming SpongeBob up to stay afloat. As they say their goodbyes, Larry arrives in time to pull them up from the ankle-deep lagoon.

Realizing that SpongeBob does not know how to swim, Larry sets him and Patrick to work practicing their swimming in a kiddie pool. They both somehow wind up with butt cramps, with Patrick still lamenting his lack of ice cream, as the episode ends. 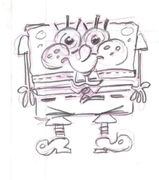 Sketch of SpongeBob's close up on Jay Lender's Facebook.[3]