SpongeBob to the Rescue!

View source
If you were looking for the article about the Learn To Read book, then see SpongeBob to the Rescue! (Learn To Read With SpongeBob).
Book
Gallery

SpongeBob to the Rescue!

In this hilarious green tale, SpongeBob starts Bikini Bottom's very first recycling center—without even knowing it! How does he do it? By collecting junk, of course! Find out all about recycling with SpongeBob in this original 8x8 story printed on recycled paper!

On the way home from work, SpongeBob finds a thrown-away propeller on the street and decides to take it home and use it as a lawn ornament.

The next day, SpongeBob brought home more junk: an old tire, a forgotten laundry basket, and a worn-out boot. He decides to make use of them by turning them into equipment.

SpongeBob continues looking everywhere around town from Goo Lagoon to Jellyfish Fields for more junk and takes it home each time.

Squidward and Patrick call him out on collecting something too incompetent to be of any use, but SpongeBob simply brushes them off and takes pride in his new hobby. He then goes jellyfishing with Patrick and catches a plastic bag that he decides to keep.

When SpongeBob gets home, he notices his collection bins overflowing, much to his surprise.

His new hobby has caused him to miss his job at the Krusty Krab, leaving Squidward to take his place. SpongeBob agrees to report for duty after he is finished organizing his new additions.

Sandy then appears to inform him that the fish sharing their recyclables with him were doing it to free themselves, as polluting the ocean with trash can pose a threat on its inhabitants.

This inspires SpongeBob to open his own recycling center to rid his house of overflowing trash. The whole town congratulates his heroism and rewards him with the Green Medal of Honor. 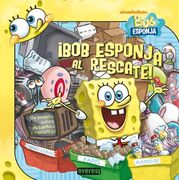