View source
If you were looking for the article about the location, then see RandomLand.

"SpongeBob's Bad Habit"
"SpongeBob in RandomLand" is a SpongeBob SquarePants episode from season 12. In this episode, SpongeBob and Squidward take a delivery to a dreaded town where the laws of logic no longer apply.

The episode begins with Squidward getting a call from a RandomLand citizen who wants a Krabby Patty. Squidward almost denies, but the greedy Mr. Krabs forces both him and SpongeBob to go deliver the order, despite RandomLand being an extremely dangerous place. The two start walking there, with SpongeBob doing random walking. When he does a random dance in a grass skirt, his body disappears, making Squidward happy and also dance in a grass skirt. However, this makes Squidward's body disappear as well.

It turns out their bodies got transported to RandomLand, and the two slide down a large mountain until they eventually reach the ground. The two realize they are in RandomLand, so they start looking for the customer who ordered the Krabby Patty, while witnessing how random the place really is. The two check out several locations, but none of them are owned by the customer. While at one house, a RandomLand citizen takes the bag with the Krabby Patty inside from SpongeBob, causing him and Squidward to try to get it back. They reach her, but it turns out she only wanted the bag, and the Krabby Patty is still in the hands of the Krusty Krew.

After that, a bunch of doors start to appear behind SpongeBob and Squidward. The latter opens a few, with the inside of the doors containing extremely frightening creatures. This makes Squidward scared, but when SpongeBob thinks he saw Mr. Krabs going into one of the doors, the two chase him through many very random dimensions until they eventually end up back at the Krusty Krab again. It turns out the crab was actually Rodger, the RandomLand citizen who ordered the patty. The episode ends with SpongeBob giving the patty to the customer, but it turns out that since the patty was late, the customer does not have to pay for it, causing Mr. Krabs to cry uncontrollably due to not getting his money and getting hit by the cash register, as punishment for sending his employees on a wild goose chase.

A piece of behind the scenes work was revealed in this video. 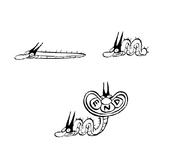