The cover shows Patrick wearing SpongeBob's pants and Patrick's pants are on the ground. The sign has SpongeBob scribbled out with Patrick with the R being reversed. The background are bubbles. 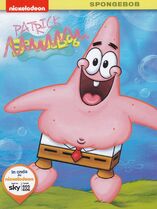 Italian cover
Add a photo to this gallery
Retrieved from "https://spongebob.fandom.com/wiki/SpongeBob_and_Friends:_Patrick_SquarePants?oldid=969011"
Community content is available under CC-BY-SA unless otherwise noted.