"Sandy's Blasting Bronco"
SpongeBob SubPants Adventure is a SpongeBob SquarePants amusement ride. In this amusement ride, the audience "dives into adventure on a submarine voyage along with SpongeBob and all his Bikini Bottom friends!" On this wild and silly deep-sea expedition, YOU choose the destination and YOU interact with your hapless captain -- Patrick Star!.

Guests experience a whole new kind of submarine adventure as they take the "Le Plunger" into the hyper-real, life-sized world of Bikini Bottom which is viewed through a 30-foot wide observation window. Patrick Star and his friends are seen on screen through 3D technology, as guests are able to have real-time conversations with him and help choose their path through the underwater adventure. To further immerse guests, four large viewing portholes bring the experience of the entire submarine to life.

Super 78, an attraction design and production company, provided for the making of the ride their newest at the time, custom software and hardware for the SpongeBob SubPants Adventure named the Gepettoo™. This Animation Control System allows a performer behind the scenes to control all aspects of the full-sensory experience on screen in front of audiences. The performer's voice becomes an on-screen character, and he has an unlimited palette of animation options which brings the character to life. The performer also runs the lights, sounds, bubbles, and scents with the push of a button.

Also used in the design of this breakthrough attraction is Mushroom VR™, a proprietary attraction design tool that utilizes the Oculus Rift virtual reality headset to pre-visualize the experience. It provides an accurate guest-experience assessment of all the attraction content, including 3D environments, media, scenic and show elements, making it seem as if you are submerged within Bikini Bottom. 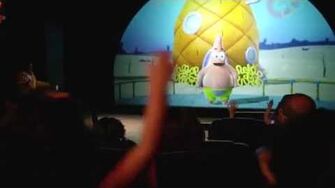 Retrieved from "https://spongebob.fandom.com/wiki/SpongeBob_SubPants_Adventure?oldid=3444678"
Community content is available under CC-BY-SA unless otherwise noted.