Following the sponsorship the race is called SpongeBob SquarePants 400. A similar event took place in 2016, where Nickelodeon sponsored a race and called it the Teenage Mutant Ninja Turtles 400. This race, however, was later in the season and took place at Chicagoland Speedway. 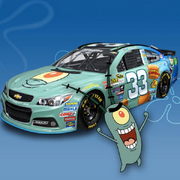 Retrieved from "https://spongebob.fandom.com/wiki/SpongeBob_SquarePants_400?oldid=3442848"
Community content is available under CC-BY-SA unless otherwise noted.