Encyclopedia SpongeBobia
Register
Don't have an account?
Sign In
Advertisement
in: Articles in need of more references, Amusement rides
English

The 4-D ride film begins with Painty the Pirate about to sing the television series theme as usual, but he instead pops out of the painting and throws the riders into Bikini Bottom. The audience ends up in the Krusty Krab, where SpongeBob welcomes them and shows them how to make a Krabby Patty by pointing at the ingredients with his spatula. When preparing the Krabby Patty, which was made for Sandals, SpongeBob accidentally loses a pickle. The pickle then bounces out of the restaurant into Patrick's hand on a pogo stick. Patrick steals the pickle. SpongeBob, while confused at Patrick's apparent betrayal, ultimately sets out to rescue the pickle, bringing the riders along with him on his bubble bike.

SpongeBob first rides out into town, wreaking havoc in the process, and eventually rides through Jellyfish Fields, where he is stung by a horde of jellyfish. Suddenly, SpongeBob ends up falling into Rock Bottom, where a fish pops the bubble bike by biting it. The force of the pop hurdles SpongeBob into the air, landing in the Chum Bucket.

It is revealed that the real Patrick had been kidnapped by Plankton, and the pickle thief was a high tech robotic version of Patrick. The robot then pursues SpongeBob, only to be unplugged by Patrick, who is looking for an electrical outlet for his toaster. Plankton is then crushed by his robot and SpongeBob recovers the pickle.

Sandals enters the Chum Bucket to eat his patty; however, it turns out that he is allergic to pickles. He swells up and then explodes. His head, eyes, and mouth land on his shoes and he runs out of the restaurant while suffering from an allergic reaction, at which SpongeBob laughs, ending the 4-D ride film.

This ride is a 3D motion simulator ride. Riders sit in a 3-D theater with chairs that rock and tilt along with the 3D movie. Various effects are also used such as scents, water, wind, air blasts, leg ticklers, vibrations, strobe lighting, and smoke. 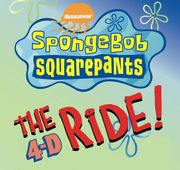 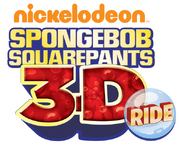 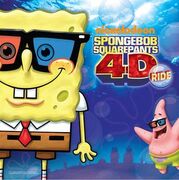