Encyclopedia SpongeBobia
Register
Don't have an account?
Sign In
Advertisement
in: Events, Music, SpongeBob SquarePants in Singapore,
and 4 more

SpongeBob SquarePants: The Sponge Who Could Fly

View source
This is the page about the musical. For other uses, see The Sponge Who Could Fly (disambiguation).
Not to be confused with SpongeBob SquarePants (musical).

SpongeBob SquarePants: The Sponge Who Could Fly

The script was written by Steven Banks, who had become the head writer for the series in season 4, with songs by Eban Schletter. Gip Hoppe served as director, with choreographer and associate director Jenn Rapp, and the set was designed by Rialto vet David Gallo. The musical was produced by Nickelodeon and MTVN Kids and Family Group, partnered with Broadway Asia Entertainment.

Main article: The Sponge Who Could Fly

This musical is a story of courage and coming of age which tells of SpongeBob's desire to fly with the jellyfish of Jellyfish Fields.

The musical was originally launched in Singapore at The Singapore Expo Hall on May 31, 2007, as SpongeBob SquarePants Live! The Sponge Who Could Fly!, and was the first customization of SpongeBob into a live musical event, joining a list of TV-inspired live offerings from Nickelodeon that includes Blue's Clues and Dora the Explorer. It traveled to five cities across Asia, including Singapore, Kuala Lumpur, Jakarta, Bangkok, and Manila, before it toured cities of Australia and New Zealand.[20][21] A Mandarin-language version toured China and Hong Kong in the fall.

In 2009, the show toured the United Kingdom and Ireland. It opened at the Hackney Empire in London, England on February 3, 2009. The musical toured the UK from March 2009 for six months with performances at the Hammersmith Apollo, Southend, Edinburgh, Birmingham, Reading, Salford, Sunderland, Nottingham, Liverpool, High Wycombe, Plymouth, Bristol, Cardiff, Oxford, Killarney and Dublin.

Alison Pollard choreographed and directed the UK adaptation and said that the episode already had a few songs in it, which helped with the conversion to a musical. She said "The episode chosen for the show already had four or five really catchy tunes in it, and the idea that he wants to fly with jellyfish is nice for the stage as well." The adaptation includes twelve songs of various styles.

English actor Chris Coxon played the role of SpongeBob. Coxon was a fan of the series and said "If I'd been told a year ago that I would be playing SpongeBob today I would have loved it, although I'm not sure I would have believed it." Coxon admitted it was difficult to adapt the show into a musical. He remarked "It is difficult because you are trying to recreate this character that is so fluid on screen. For example I'm just getting used to my square costume, although it does have an incredible design, so that, although I am restricted, I can do a lot of the things he does in the cartoon."

The musical was well received by most critics. In his review for The Sentinel, Chris Blackhurst brought along a seven-year-old child called Dylan Brayford, and his 34-year-old godfather, James Humphreys, from Nantwich to watch the musical. The two "weren't disappointed." Blackhurst said "The fast-paced tale of courage and dreams kept both entertained with plenty of hilarious moments for the children and a sprinkle of gags which flew over younger fans' heads but brought a wry smile to mums and dads' faces." Brayford summed it up, saying "It was good, but not quite as good as the TV show."

Gordon Barr and Roger Domeneghetti of the Evening Chronicle described the show as "a silly riot of color[...] as you'd have to expect from an adaptation of a cartoon TV show." They lauded the song called "Ker Ching" performed by Mr. Krabs, saying "[It] stands out above the rest." Viv Hardwick of the The Northern Echo said "Younger ones are just pleased to see a colorful collection of characters, vaguely resembling the ten year-old TV show cast, cavorting around the stage." Hardwick praised the role of Charles Brunton as Squidward Tentacles while John Fricker (Patrick Star) and Martin Johnston (Mr. Krabs) were said to "win the biggest costume contest." 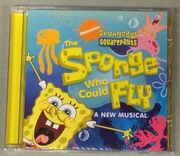 Translation of the trailer

Patchy: Hello friends! Did you know the SpongeBob show came to your town? Do you want to meet the habitants of Bikini Bottom? They are here. Welcome!