Encyclopedia SpongeBobia
Register
Don't have an account?
Sign In
Advertisement
in: Online games, Sections in need of expansion, Games

View source
This is the page about the online game. For other uses, see SpongeBob Saves the Day (disambiguation).

Play at Nick.co.uk
SpongeBob Saves the Day! is a SpongeBob SquarePants online game.

In this game, the player must help make SpongeBob's favorite holiday the best day ever by doing tasks for his friends. He first visits Patrick to make him a Jelly Patty and changes Junior's diaper. At the end, SpongeBob has a party with his favorite friends: Squidward, Mr. Krabs, Pearl, Sandy, Mrs. Puff, and Gary.

All ten of the main characters appear in the game, along with a variety of one-time and background characters. SpongeBob is the only playable character.

An unused character dubbed "Yummer," who appears to be a humanoid monster with a realistic, smiling mouth and set of eyes, can be found on one of Mrs. Puff's sprite sheets in the Krusty Krab as well as another Krusty Krab sprite sheet featuring Mr. Krabs and Incidental 106, the latter of which contains what appears to be an alternate pose for Yummer, indicating that it may have had an animation at one point. In the game's library.json file, Mrs. Puff's first sprite sheet is defined as "t_tmpYummer," which is believed to be the name of the monster.

The creator of Yummer (whose original name was "Yum") later stated that Yummer was a 3D-modeled placeholder. The character gained a small cult following and was later referenced in Nickelodeon All-Star Brawl in the character data for SpongeBob as a joke by the developers.[1][2]

An unused sprite in Patrick's spritesheet features him without eyes. 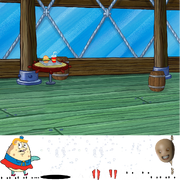 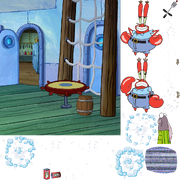 The other sprite sheet featuring Yummer 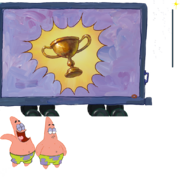