Start a Wiki
If you were looking for the article about the episode, then see SpongeBob LongPants.

SpongeBob LongPants is a SpongeBob SquarePants DVD that is available in Spain, Netherlands, Germany, and Australia. It contains eight episodes from season 9 and is based on the episode of the same name.

The cover shows SpongeBob as his SpongeRobert alter-ego, confidently standing in the middle of the road with a grin on his face. Mr. Krabs and Squidward appear to look at him angrily and Patrick appears to be observing him while sipping on a drink. There are quite a few locations in Bikini Bottom shown in the background, which include the Krusty Krab, a lighthouse, SpongeBob's house, Squidward's Easter Island head, and a few Bottomite houses. 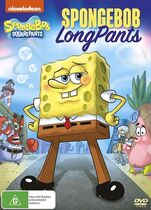 Audio Options
Add a photo to this gallery
Retrieved from "https://spongebob.fandom.com/wiki/SpongeBob_LongPants_(DVD)?oldid=2564179"
Community content is available under CC-BY-SA unless otherwise noted.