View source
If you were looking for the article about the DVD, then see SpongeBob LongPants (DVD).

"The Sewers of Bikini Bottom"

"Larry's Gym"
"SpongeBob LongPants" is a SpongeBob SquarePants episode from season 9. In this episode, SpongeBob starts wearing long pants, which causes his personality to change.

In the beginning of the episode, SpongeBob is first seen looking at billboard announcing a Mermaid Man and Barnacle Boy movie reboot. He then starts to shiver due to the cold breeze, replying that he has cold knees. Suddenly, a salesman drives up and tells SpongeBob that he should buy long pants. SpongeBob, after thinking it over, decides to try on the long pants. When he does, the salesman tells him that he looks more mature with the pants. SpongeBob does not believe it at first, but does after Patrick walks by referring to him as "man." SpongeBob, pleased by the results, pays for the long pants and the salesman walks off.

SpongeBob then heads to the Krusty Krab, where he shows off his long pants to all of the customers, who are amazed by his looks. Even Mr. Krabs does not recognize SpongeBob at first until he gets a closer look at him. SpongeBob shows off his new long pants to Mr. Krabs, and he decides to let SpongeBob use the cash register while putting Squidward in the kitchen. However, after Mr. Krabs sees that SpongeBob is not able to run the register properly, he decides to have him greet the customers instead. SpongeBob greets the pleased customers, but soon decides not to do it anymore after getting ketchup on his long pants due to a messy eater. SpongeBob then decides he is too good for the Krusty Krab, and he decides to quit, and leaves.

In town, SpongeBob shows off his maturity by paying for a bill, but stops at the dry cleaners after a boatmobile gets water on him. A little later, SpongeBob decides to take the driver's test, and despite causing massive damage to other boats, the driving instructor decides to give SpongeBob his driver's license due to him wearing long pants and the blood flowing to the instructor's head (much to Mrs. Puff's horror). SpongeBob soon gets a job at Fancy!, where the customers are impressed by his hospitality and long pants. When one of customers asks for his name, SpongeBob refers to himself as "SpongeRobert." The fancy customer then invites SpongeBob to a party, which he gladly follows him to.

SpongeBob is now at a party that he was not really expecting. SpongeBob notices a sign outside with the premiere of the Mermaid Man and Barnacle Boy movie reboot and asks the others if they could go and see the movie. However, the fancy fish recommends seeing a movie called The Table.

At the movie, SpongeBob is bored of it and notices Squidward after he yells at him. Squidward is then kicked out of the movie theater due to being too loud, and SpongeBob follows him out. Squidward angrily goes home, and Sandy, Patrick, and Mr. Krabs appear. Sandy asks if SpongeBob is going to see the Mermaid Man and Barnacle Boy movie. The fancy fish invite SpongeBob to drink coffee and watch the nightly news, but SpongeBob declines, saying he would rather see the Mermaid Man and Barnacle Boy movie and that he works at the Krusty Krab.

The fancy fish then leaves SpongeBob after realizing he is a fraud, and Sandy gives SpongeBob his ticket to get into the movie. Everybody else heads inside, but the Ticketman will not let SpongeBob head inside because all long pants are not allowed in this theater which is against the house rules for a movie rated. Realizing that only short pants allowed in there, SpongeBob tries to take them off, but is unsuccessful and starts to breakdown in tears. Mr. Krabs heads back out, saying he cannot watch the movie due to the crying, and SpongeBob tells him that he wants his short pants back. Mr. Krabs then cuts off SpongeBob's legs, who is able to grow them back and is pleased that his pants are short again.

Mr. Krabs expects SpongeBob to be back on the grill tomorrow morning and even gives him a chance to cook outside. SpongeBob says he is able to drive to work now, but the driving instructor appears and rips up the license due to him not wearing long pants anymore. Mrs. Puff then calms down, glad that whatever happened is over, as the episode ends. 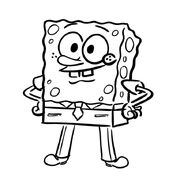 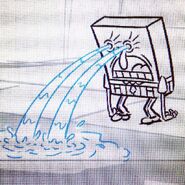