SpongeBob HeroPants is a SpongeBob SquarePants video game created by Activision for the Xbox 360, Nintendo 3DS, and PlayStation Vita.[1] It is based on the SpongeBob feature film The SpongeBob Movie: Sponge Out of Water, and was released on February 3, 2015 in North America, and on March 26, 2015, in the United Kingdom.

The cover illustrates Invincibubble, Mr. Superawesomeness, Sour Note, and Sir Pinch-a-Lot, each in a confident pose.

SpongeBob walks to the Krusty Krab and thinks he's going to have a "normal" day at work. Later, he opens the front door of the restaurant and then notices that Sandy and Patrick are coming along too. When Patrick, SpongeBob, and Sandy enter the Krusty Krab, Mr. Krabs, Plankton, and Squidward are getting chased around by random objects and SpongeBob states things are going not normal at all. SpongeBob thinks it's Plankton causing this, but suddenly, Bubbles the Talking Dolphin comes out of a space triangle and tells SpongeBob and his friends about someone using the page of a book to make weird things happen. He then holds up a feather which suddenly gives SpongeBob and his friends temporarily superhero powers that can save Bikini Bottom from a mysterious group of enemies someone created.

After tangling with Plankton's giant robot and Squidasaurus Rex, SpongeBob and his friends discover that SpongeBob is the one who caused the not normal events, judging by the handwriting. Plankton then writes on the page, having him, SpongeBob and the others to enter SpongeBob's mind to get the last page and wake SpongeBob up. After the last page is collected, the gang exits SpongeBob's mind and begins to celebrate. Bubbles then appear again to get the collected pages and depending on the amount of pages that have been collected in the game, one of the two alternate endings is shown.

SpongeBob's dreams are coming to life, altering the very fabric of space and time. Players progress through alternate manifestations of Bikini Bottom as they attempt to repair SpongeBob's mind. To restore order, players need to employ the unique superpowers of six playable characters - SpongeBob, Patrick, Squidward, Sandy, Mr. Krabs, and Plankton - to solve challenges, battle enemies, and unlock new areas. In addition to platforming combat and exploration, the game features puzzles, boss battles, upgradable skillsets, and a plethora of hidden items to discover.[2]

There are fifteen levels in total, four each consisting in three different worlds:

Some critics have criticized the game, calling it more of a remake/sequel to Plankton's Robotic Revenge, seeing as designs and music are not much different. Because of this, critics have not given this game much of a higher rating than Plankton's Robotic Revenge.﻿[citation needed] Likewise with the latter, this game did not sell well, with 20,000 copies sold for the Xbox 360[3], and 10,000 sold for the Nintendo 3DS and the PlayStation Vita. Cyanidecoke of Atomix said in particular, that "it would be an acceptable game if we saw it in a PlayStation One, but now it's unacceptable."[4]

Brad Gruetzmacher of The Vita Lounge noticed the technical difficulties, the "annoying one-liners," and the total duration of the game while praising the visuals, and the music. He went on to call the game "an experience that may not be what veteran gamers want but it’s a hit with the target audience."[5]

Marc Saltzman of Common Sense Media said in a review that "the game isn't a complete fail. It's hard not to fall for SpongeBob's infectious charm, and there's some variety in levels and characters, but overall this game feels more like a plug for the movie it's tied to than a competent standalone game."[6]

While the reception for the game was negative, it was nominated for the "Favorite Video Game" award at the 2016 Kids' Choice Awards. This makes it the third SpongeBob video game to be in the award show, with Battle for Bikini Bottom in 2004 and Creature from the Krusty Krab in 2007 appearing beforehand. In addition to this, it is the first SpongeBob video game to have not won in the Kids' Choice award show. 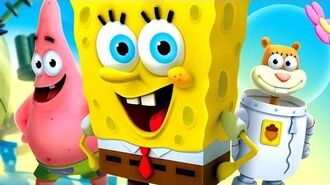 SpongeBob HeroPants Trailer 2
Add a photo to this gallery

Retrieved from "https://spongebob.fandom.com/wiki/SpongeBob_HeroPants?oldid=2525930"
Community content is available under CC-BY-SA unless otherwise noted.