SpongeBob Gold was a year-long international SpongeBob SquarePants campaign, mainly consisting of television events, leading to the premiere of the new episodes: The Golden Krabby Patty Spectacular ("Goodbye, Krabby Patty?"), Lost Treasures ("Lost and Found") and SpongeBob's Spooktacular Halloween ("The Legend of Boo-Kini Bottom"). Other commissions included various shorts, contests and fashion collections, which began to become available in May 2017.

In Asia, the special was preceded by a contest where the contestant had to see 5 promos about the event and tell "what you think the secret recipe for the Krabby Patty is!," in order to win, among other stuff, an exclusive lunch box, the DVD Sea Side Story and a limited edition apron.

In countries like Germany, Russia, and South Korea, Season 10 premiered with the episodes listed below, as part of the campaign.

SpongeBob's Heart of Gold celebration was a Valentine's Day marathon event, which aired in Iberia on February 12, 2018 in France, on February 14, 2018 in Germany, as a two-week long event from February 12 to February 23, where Season 11 premiered as a whole, and on March 12, 2018 in Greece. In all the other countries, "Don't Feed the Clowns" premiered, while in most of them, the event lasted for a week.

SpongeBob Heart of Gold Mosaic was a corresponding event, where audiences could visit spongebobgold.com and upload a photo of themselves. Once enough photos were collected, Nickelodeon would reveal a special image made up of them; it was available in countries such as Australia and New Zealand, Denmark, Sweden, Norway and Latin America.[18]

Between March 5 and 16, 2018, people living in Russia could visit zoloto.nickelodeon.ru and enter Nickelodeon Russia's exclusive "Праздник золотого сердца Губки Боба" contest. To enter, participants would need to write a short essay on which of their friends or friends has a heart of gold, like SpongeBob. During the results, 12 finalists were selected and won a large SpongeBob SquarePants toy. The author of the best essay won an exclusive SpongeBob Gold sweatshirt.[17]

Submitting A Picture For SpongeBob Heart Of Gold Mosaic

Main article: List of shorts#SpongeBob Gold shorts
Shorts about the Top 10 Krabby Patty Varieties throughout the show, Flipper and his experience working at Nickelodeon, and others have appeared across many countries.

In Asia, with your entrance to Urladdress.com, you could play the following online games:

There are also, sites across other countries, like Nickelodeon.gr in Greece, where those games have been advertised, as part of the campaign.

Also, there was a game called Lost Treasures, as part of the event of the same exact name.

Audiences would look for a golden treasure on Nicktoons UK every day from July 21 until August 20, then come online to this link and find the same item. If they were correct, they could enter a competition to win prizes. Plus, there would be four bonus treasure chests that would unlock at random times throughout summer. If they made it online in time to open them, they could win tech prizes.
There is also a poll in the site of the event (as there's a poll for every page of a show/event in Nicktoons.co.uk), where people vote about "What treasure would you like to find on a desert island?". As of December 23, 2017, the Robot has 18%, the Bike 13%, the Watch 8%, and the Gaming Console 61%.

In Greece, there was a contest where after watching one hour of Nickelodeon programming (22:00-23:00 PM; UTC +2; starting on March 17), the contestant had to tell how many golden pineapples he or she saw to win one of the 200 Easter candles and a selfie with SpongeBob himself.

In the Golden Moments contest, people could take photos that describe their "golden moments" in their life and upload them to the German SpongeBob Gold website. If someone wins, then they get monthly prizes that include one of five family trips to See in Paznaun-Tirol and four tickets for the Movie Park Germany.[19]

In the Golden Tickets contest, said tickets could be obtained via special on-screen codes during airings of new episodes, visits on idee+spiel an McMEDIA-Fachgeschäften shops, or visits at Erlebnispark. In the contest, prizes would include SpongeBob golden statues, PEZ dispensers, Mega Bloks playsets and breakfast sets, copies of the latest SpongeBob magazine, the CD The Master Grills and the DVD "Die SpongeBob Geburtstagsbox", SpongeBob Gold T-Shirts by Spreadshirt and writing sets, and tickets to Movie Park Germany (which operates a NickLand attraction), among other things.[19]

A tour event occurred at Paznaun, in Tyrol, Austria, from August 13 till August 18, 2017. It started off with an one-hour party hosted by Robert Steiner, of Hallo okidoki fame, alongside Meet & Greet, make-up and painting sessions. The second day, a SpongeBob film was shown at an open-air cinema. The fourth day, an air mattress race (under the "supervision" of Larry the Lobster) was organized, and the fifth day, a leisurely hike to the Asher Hut occurred, with Bergbahnen See as the meeting point.[19][20]

We Love SpongeBob was a Japanese event, released under the SpongeBob Gold banner. It was held at the TOBU department store IKEBUKURO (8F Event Space - Aisle 3), from March 23 to April 4, 2017. The event would last every day, from 10 am to 8 pm.[21]

The event was presented by Toy Kingdom, this event promoted active play and encouraged kids to be brave and have fun while being spookified. Drawing reference from the special “The Legend of Boo-Kini Bottom”, a series of activities were on hand for Nicksters to band together and beat The Flying Dutchman by chanting, “Scary means funny!”.

There were game booths with beat-the-clock games like the Open Sesame! Horror House Maze, and the Pine-App-le Pit booth provided Nickelodeon tablet games for kids to trial while roaming the area. It also included reenaction of scenes from the special, such as SpongeBob and Patrick's entrance to the Chum Bucket. 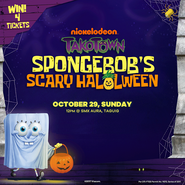 Representation of Mr. Krabs’ Horrors of Chum Bucket. Nicksters would shoo away the Flying Dutchman and his allies by chanting, “Scary means funny!”

On Level 3 of the Raffles City Shopping Centre in Singapore, there would be from December 1 to December 17 a SpongeBob Gold Live Stage Show hosted by Patchy the Pirate and featuring performances of the main characters' cosplayers. As part of the event, a limited amount of shoppers could redeem themed umbrellas and wrapping papers with a minimum of $300 and $50 respectively; umbrellas were also given away via a Facebook contest.[22] By spending $30 at shops, shoppers could also redeem their passes of choice for any one of the following events: Meet & Greet sessions, parties including games and sweet treats, and themed Christmas decoration workshops.[23][24] In an additional Employee of the Month event named after the episode itself, that lasted till February 28, 2018, shoppers could vote for their favorite service staff and win 100,000STAR$ if their nominated member won.[25]

An invitation-only and exclusive SpongeBob Gold collection designed by veteran homegrown designer, Alfie Leong, was shown on the mall's runway on a day prior to the stage show.[26] 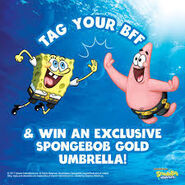 Nickelodeon & Viacom Consumer Products unveiled on February 17, 2017, the SpongeBob Gold fashion collection at London Fashion Week, with six international designers, some of the self-proclaimed fans of the show: Peter Jensen, Bobby Abley, Salar, Maria Francesca Pepe, Suecomma Bonnie, and Bad Denim. That fashion collection features 27 individual pieces of clothing for men and women, footwear, accessories, and jewelry. It is available at retail exclusively outside of the US since May 2017, with retail partnerships, including the Wonderland Shop in London (from May 18), where the retail launch of the fashion line was celebrated with a private launch party and late night shopping event at Wonderland featuring DJ Jodie Harsh.[27]

Frencesca and Salar, the creators of the brand SALAR

Peter Jensen, with one of his designs

Another collaboration was made with Tities Sapoetra to unveil a line of SpongeBob Gold fashion collection at the Plaza Indonesia Men's Fashion Week 2017, on September 26, 2017.[28]

A collaboration between Nickelodeon Latinoamérica and Mexico-based fashion brand Malafacha for a Bob Esponja fashion line was made, which formed part of the fashion labels' Spring/Summer 2018 collection. It is partly inspired from pre-Columbian and Mexican imagery and traditions, as well as los tiliches de Putla and coastal festivals. This clothing collection was unveiled at an event at Acuario Inbursa in Mexico, on November 12, 2017, during Mercedes-Benz Fashion Week 2017, in which 20 unique pieces from the collection were showcases, using Kaltex textiles, Swarovski jewellery and NIKE footwear.

Also, Pitti Bimbo has showcased a selection of designers involved in a capsule collection for kids, inspired by SpongeBob Gold, along with KID’S EVOLUTION, a 360° project on the Lower Level of the Main Pavilion, The project was supported by retailers such as Luisaviaroma, yoox.com, Harvey Nichols and La Rinascente Milano. It has been designed by five designers – Bad Deal, Cor Sine Labe Doli, Kids Love Dogs, Riccardo Comi, The Dots.[29] 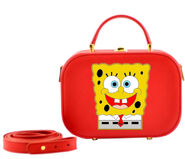 Nickelodeon Spain has also collaborated with Spanish fashion designer Ion Fiz (considered to be a fan of the show) for two new SpongeBob SquarePants fashion lines. Ion Fiz showcased them at the first Mercedes-Benz Fashion Week Madrid of 2018. Unique pieces from the collection include silk trench coats, tuxedos, sweatshirts and dresses, and fabrics. The collection is complemented by a line of men's sports shoes which feature SpongeBob prints.[30]

In France, UK and Latin America running in conjunction to a promotion where customers redeem their credits to stream episodes of the Nickelodeon shows SpongeBob SquarePants, The Loud House, Avatar: The Last Airbender, The Thundermans, and Sam & Cat, every customer who purchased an item from the "King Junior" menu would receive one of 36 SpongeBob SquarePants figurines, including six special SpongeBob Gold collectors figurines.
The promotion was also available in Spain (official site), in conjunction with another one in cooperation with Nickelodeon Hotels & Resorts, where if a customer finds the "Golden SpongeBob" in their meal, they can earn a family trip that included entrance to the theme park.[31]