SpongeBob Goes to the Doctor

SpongeBob wakes up in the morning, only to find out he has the suds. He tries to cover up the fact that he is ill so that he does not have to miss a day of work.

Patrick is seen trying to cure SpongeBob by putting corks in his holes, making SpongeBob get bigger and fatter every time he sneezed. SpongeBob thinks he is better, so he goes to call Sandy and tells her not to come. However, his fingers are too big for the buttons, so he asks Patrick to call her. Patrick does this. Sandy is seen in her treedome working out and Patrick tells her everything. Sandy then says she'll go and have a look at SpongeBob. Patrick goes into a panic and tells SpongeBob that Sandy will take him to the doctor.

After some time, Sandy comes and finds out that SpongeBob is not cured and she and Patrick have a war over SpongeBob's health. The latter (thanks to Sandy and Patrick) goes flying into the air and lands near the Krusty Krab. He gives a big sneeze and the building blows up.

SpongeBob is back to his normal size and Sandy takes him to a real doctor. The doctor gives SpongeBob some medicine and he is better in no time. 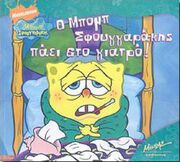 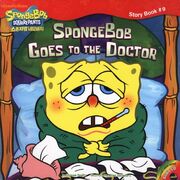 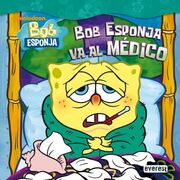 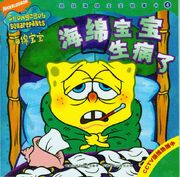 Chinese cover
Add a photo to this gallery

Retrieved from "https://spongebob.fandom.com/wiki/SpongeBob_Goes_to_the_Doctor?oldid=3148218"
Community content is available under CC-BY-SA unless otherwise noted.