SpongeBob DetectivePants: The Case of the Missing Spatula

SpongeBob is about to go to work one morning when he discovers that his spatula has been stolen from its case. He and Patrick set out to find it under the names of SpongeBob DetectivePants and Patrick PatrickPants. They question Plankton, Sandy, and Larry the Lobster, but none of them have stolen it. Karen tells them that it might be the person they least suspect.

SpongeBob then finds a trail of ice cream he made, which leads to the Goo Lagoon. He and Patrick then find Flipper buried in the sand, and Patrick states that he thought it was a sand digger. SpongeBob points out that Karen was right: It was the person he least suspected! (Patrick) 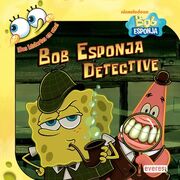 Spanish cover
Add a photo to this gallery

Retrieved from "https://spongebob.fandom.com/wiki/SpongeBob_DetectivePants:_The_Case_of_the_Missing_Spatula?oldid=2997893"
Community content is available under CC-BY-SA unless otherwise noted.