Patrick pretends that he's a superhero named Speed o' Lightning. He makes up a theme song for him but has trouble coming up with lyrics along the way or gets distracted by something.

When evil happens every day,

And bad guys seem to get their way,

Speed o' Lightning, he'll be there!

With one punch, they'll land in jail!

When some dude has an evil plot

And breaks out of his cell a lot,

Who'll come to tie him in a knot?

Speed o' Lightning, he's the one!

Working till the job is done!

For the moment, anyway--

Till that same crook gets away.

He has one weakness,

And all those villains know.

Could this be the end, folks,

Of our favorite show?

We can't believe it ends this way!

Will work to save the day!

He's gonna have it all.

He'll get that bad guy somehow...

He'll think of something...

When someone calls out in distress,

His fierce dedication to truth and justice isn't one bit less...

Bad guys never get away!

'Cause he'll kick it in the pants!

I can think of a less dumb rhyme,

When super-geniuses hatch a plot

Let's see what other ideas we got...

That you can't follow even if ya spend all your money trying to track down...

He's got a theme song

That all the viewers know!

They love to sing it

When they watch his show!

It's being cancelled just because

Some guys at the network figgered a few hunnnerd thousand viewers aren't enough to...

When networks trying to kill a show,

The fans rise up to let 'em know

They're never gonna let it go.

He can run and he can fly!

He's got powers by the score!

Every season he's got more!

He walks through mountains!

He sees through time!

He does some other stuff

I'm not sure how to rhyme!

When writers on our heroes change

And stories start to get real strange

That's why you can trust his name!

On that you can rely!

But they'll keep on returnin'

Even if they die!

He's got a hunch

It's time to stop pretending

And go see what's for lunch.

To that wonderful guy,

He won't be gone for long!

Speed o' Lightning, he's the one!

Playing hero sure is fun. 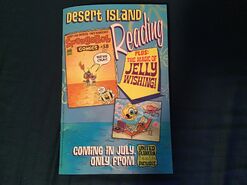 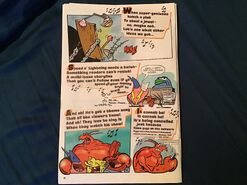 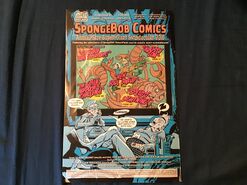 Add a photo to this gallery
Retrieved from "https://spongebob.fandom.com/wiki/SpongeBob_Comics_Annual_Super-Giant_Swimtacular_No._4?oldid=3010968"
Community content is available under CC-BY-SA unless otherwise noted.