Start a Wiki
SpongeBob and Sandy are good friends. Series creator Stephen Hillenburg stated in 2014 that he created Sandy as "a strong female character that could be a friend to SpongeBob but not a love interest."[1]

"A Flea in Her Dome"

"What Ever Happened to SpongeBob?"

Of all the episodes to this date, this is the one that most likely hints at a possible relationship between SpongeBob and Sandy.

Despite the reveal that the wedding of SpongeBob SquarePants and Sandy Cheeks was just a play, small hints suggest that SpongeBob and Sandy getting married was not a completely random scenario. These include:

"Someone's in the Kitchen with Sandy"

"It Came from Goo Lagoon"

“Goons on the Moon”

To: Sandy
The smartest, prettiest squirrel in Bikini Bottom.
Signed: A Friend

The SpongeBob SquarePants Survival Guide by David Lewman makes a joke about SpongeBob having a crush, indicated to be Sandy. Lewman, having never worked on the show, was unaware of Hillenburg's rule not to have SpongeBob even hint at romance.

One of the things SpongeBob can say during a game over is "Tell... Sandy... I love her." This can be heard here.

At the beginning of the story arc where the player rebuilds Sandy's treedome, SpongeBob says that he loves Sandy more than he loves karate (which, as seen in episodes like "Karate Choppers," is shown to be a lot). 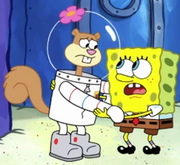 Retrieved from "https://spongebob.fandom.com/wiki/SpongeBob-Sandy_relationship?oldid=1923639"
Community content is available under CC-BY-SA unless otherwise noted.