View source
If you were looking for the article about the soccer arcade game, then see SpongeBob SquarePants Soccer Shot Pinball.
Book
Gallery

Squidward thinks they will not make the tryout. However, SpongeBob and Patrick seem to become very good at soccer within minutes. When Squidward tries showing them how to really kick a ball, he ends up getting his tentacles tangled up. SpongeBob then asks him if they need more soccer players for a team. Squidward replies "Yes." SpongeBob decides to go down to Goo Lagoon to get more friends on the team. Soon enough, Larry, Sandy, and Pearl have joined the team.

By the day of the match, three other fish have joined the soccer team. SpongeBob soon becomes scared when he finds out that he and friends are playing against Plankton's team. Soon, the soccer game begins. SpongeBob scores a goal, and Patrick shows him the neat yellow card he gets. SpongeBob tells Patrick that the yellow card is a warning, but Patrick says "No time for explanation."

Later, there are a few seconds left in the game, and the scores are tied. Suddenly, Sandy is able to steal the ball and pass through the player's legs to SpongeBob. The latter is about to shoot the ball when he hears Squidward shouting, "I'm open!" SpongeBob decides to pass the ball to Squidward. When the ball is in the air, Squidward flips himself upside-down and aims all four of his feet at the ball. Squidward's ball kick somehow makes the goalie dizzy, and he scores, winning the game. Squidward's team cheers and carries him away with happiness. 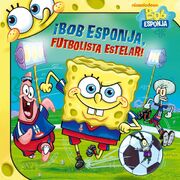